Video of this song from youtube
Average Rating : 4.08
Total Vote(s) : 75
Please rate this song between 1 star and 5 stars (5 stars being the best). Just move your mouse on the stars above and click as per your rating. Your rating will really help us to improve our website. 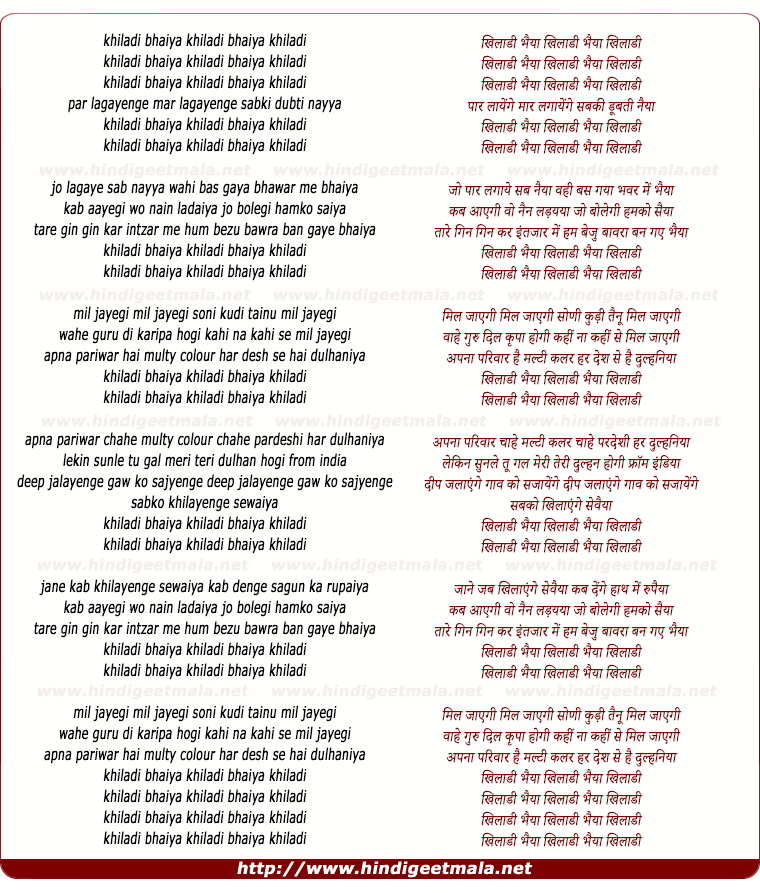 Comments on song "Khiladi Bhaiyya Khiladi Bhaiyya Khiladi"
Soumyadip das on Monday, October 29, 2012
"Khiladi Bhaiya Khiladi" Sung by Vineet Singh, Aman Trikha, Yashraj Kapil,
Alam Gir Khan & Rajdeep Chatterjee --- Lyrics by Shabbir Ahmed Music by:
HIMESH RESHAMIYA bhai is one of the most delegated composing album of him,
no one I mean no one can surpass this kind of composition in true sense,
despite of some people who are disliking even by not listening to the song!
BOW to the Master of Musik \HR/ :-)

Mohit Tyagi on Wednesday, October 31, 2012
the only star of Bollywood who do his stunts of his own and do not take
help of stuntmen.professional in marshal art also. fittest among all ..far
far above all other stars ..hats off to akshay.vote if agree

akshay raina on Tuesday, October 30, 2012
d only actor who did greatest action,greatest comedy and who was
successfull in all formats. just luv the way he lives.
awesome... AKKI SIR. #Respect #AKSHAY SIR. thnx 4 ntrtaining
us

anubhavsharmaice on Sunday, June 30, 2013
horrible. cant stop laughin at it. fans got shocked when kareena kapoor
smashed on the news reader in public. she is trying to be smart. watch
before they ban it >-> bit.ly/18oq8dP?=ctilm

lovemusic9288 on Tuesday, October 30, 2012
Rocking composition by Musical Genius Himesh Reshammiya! His music is
always the biggest hit and the best! All the singers, specially the high
note by Vineet is awesome