Video of this song from youtube
Average Rating : 4.31
Total Vote(s) : 206
Please rate this song between 1 star and 5 stars (5 stars being the best). Just move your mouse on the stars above and click as per your rating. Your rating will really help us to improve our website. 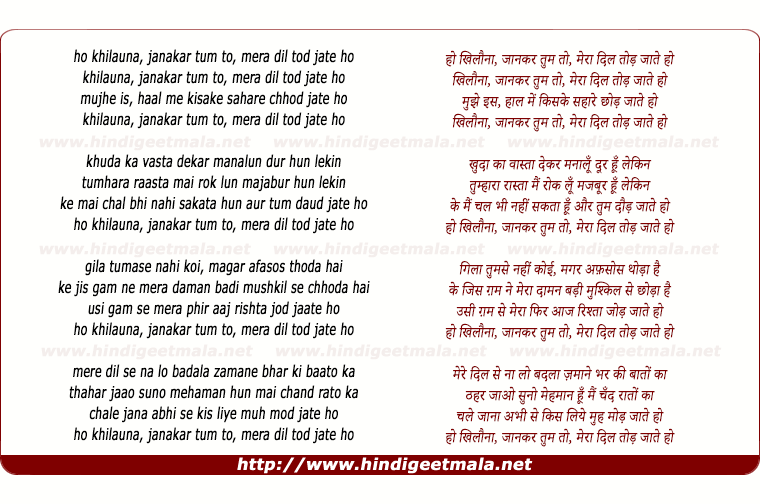 Comments on song "Khilaunaa Jaan Kar Tum To Meraa Dil Tod Jaate Ho"
MP29042003 on Thursday, April 30, 2009
this guy is a great Person i wont say an actor but as a human being he is great he never got married because he loved a girl and she got married somewhere else so he died a virgin.
this great mans name is Sanjeev Kumar the best. my favourite actor and apparently my mother-in-laws hero he was too. what an understanding!
in this film Khilona he did a superb job. God give peace to your soul where ever you are my salute to Sanjeev Kumar.

Khwaab on Thursday, May 14, 2009
...government and that which dominated earlier on was Faarsi but eventually
changed to Urdu to accomodate to all the races. So even to this day, Urdu
vocabulary consists of approximately 70 % Faarsi and the rest is a mix of
Arabic and Turkish. Standard Urdu is written in Nastaliq calligraphy style
of the Perso-Arabic script. The etymology of words used in Urdu decides,
for the most part, how polite or refined one´s speech is. For ex. Urdu
speakers distinguish between "paani" and "aab"...

Khwaab on Saturday, August 01, 2009
...some other languages in their country like Bangla and Sylhethi. So
please, stop sending me comments about the origin of Urdu. I have access to
encyclopaedias and Urdu books. I know the history of my language. But
inshallah I´ll never try to say that it´s better than anybody else´s
because though I love my own languages, I also respect that others love
theirs. So I don´t feel like putting my dignity away just because I´m
sitting behind a screen and I don´t use bad language or...

Khwaab on Thursday, May 14, 2009
..both meaning "water". Another ex. is "mard" and "aadmi", both meaning
"man". If a word is of Persian or Arabic origin, the level of speech is
considered to be more formal and grand. Also, if Persian or Arabic grammar
constructs, such as the izaafat, are used in Urdu, the level of speech is
also considered more formal or grand. Hope this helped all of those who are
confused and in denial about the origin of Urdu. Wassalaam!