Video of this song from youtube
Average Rating : 4.72
Total Vote(s) : 32
Please rate this song between 1 star and 5 stars (5 stars being the best). Just move your mouse on the stars above and click as per your rating. Your rating will really help us to improve our website. 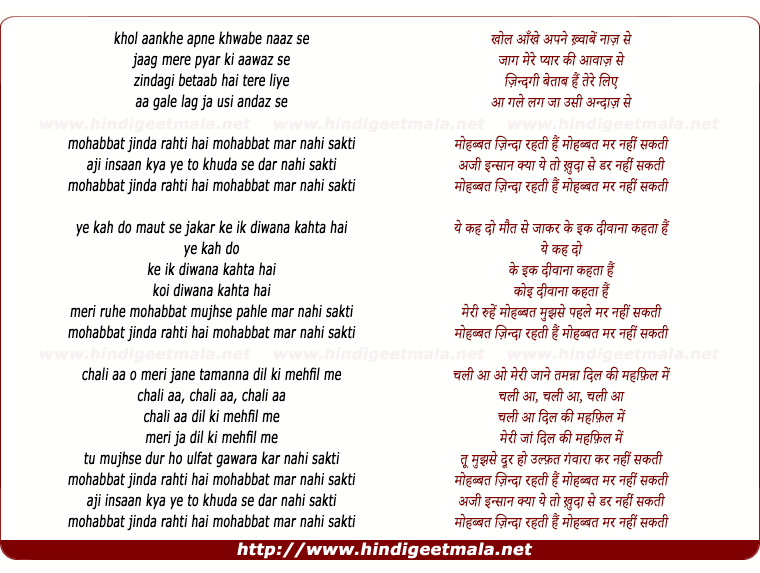 Comments on song "Khol Aankhen, Muhabbat Zindaa Rahati Hai"
1955shashi on Wednesday, June 30, 2010
This awesome ranks among the best of the legendary Rafi. What an amazing range & pitch, sung with such soul stirring intensity ! Only the genius of Rafi could do it so effortlessly & flawlessly. I get goose pimples whenever I listen to this wonderful song. Rafi saab, we miss you.
syedajaz81 on Thursday, June 16, 2011
Mohabath zinda rahthi hai mohabath marnahi sakthi . Beshak Rafi saab ki awaz hamesha zinda rahegi.one of the best song of Rafi picturised on Premnath and Bina Roy , She latter became his wife.
yasmeenfive on Saturday, October 27, 2012
A GEM OF A SONG!

LOVELY TO SEE "PREMNATH" IN A ROMANTIC ROLE WITH HIS WIFE "BINA RAI" :-)

yusufjuneja on Thursday, June 24, 2010
WOW MOHAMMED RAFI AT IT AGAIN .HE SANG THE END PART LIKE HE DID IN O DUNIYAKE RAKHWALE AND IT WAS FEARED THAT HIS VOCAL CORDS WERE DAMAGED .HE HAS DONE IT AGAIN IN CHANGEZ KHAN. IT WAS NOT AN ORDINARY VOICE BUT GODS GIFT AND HE CHOSE MOHAMMED RAFI TO ENTERTAIN MILLIONS
rsjetty on Monday, November 19, 2012
Dear Friends,

There's always an argument on who is greatest, "Rafi saab" or "Kishore da".
In my humble opinion,
Kishore da is JACK and Rafi saab is KING.
But no pack is complete without a Jack & King.