Average Rating : 4.09
Total Vote(s) : 32
Please rate this song between 1 star and 5 stars (5 stars being the best). Just move your mouse on the stars above and click as per your rating. Your rating will really help us to improve our website. 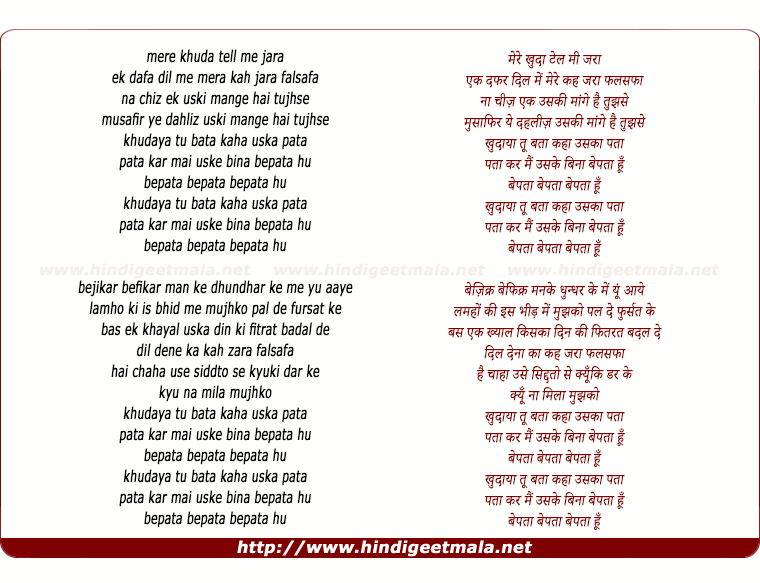 Comments on song "Khudaaya Tu Bata"
Huda Sheikh on Thursday, July 19, 2012
there is no word in urdu as BE-PATA but in urdu poets have liberty to mould
words into there own style to express there thought without being irritated
by limited vocabulary...La-pata would havent expressed what poet wanna say
here so he modified it in to be-pata and dont forget the poet is indian he
must not have that rich URDU vocabulary... but whatever the song is
lovely.Be-nishan is the word which should have been used in here... 0-o

rehan khan on Tuesday, May 29, 2012
In which dictionary are u cheching man...be-pata literally is one without
an address... and la-pata means only missing...and in this song emraan dont
have the kalki kochin address lol.''la-pata is hindi word and be-pata is
urdu word''...chek in urdu dictionary

Notteebrat on Thursday, May 31, 2012
Jeeeez STOP fighting over the word! Y'all just need a reason to pick up a
fight. Come on it's just a word. Whether it be la-pata or be-pata, WHO
CARES?! At least you get the point what he's trynna say. Enjoy the music!
And if you can't then just HOP OFF!

gaddamsanthosh on Thursday, June 07, 2012
i don't know whether imran hashmi is luckier or the songs of imran hashmi are luckier, With him every song will be superb, awesome and can't express those feeling in words. Every music lover of indian won't be there with out listening his songs...
truefriendonly on Saturday, June 09, 2012
No, Be-Pata is correct word. La-pata means lost but here, he's not lost nor he wanted to be found BUT to find out her address, so he can go there and live with her on the same address.
View all 91 comments related to song Khudaaya Tu Bata
Popular Links on HindiGeetMala