Video of this song from youtube
Average Rating : 4.45
Total Vote(s) : 1148
Please rate this song between 1 star and 5 stars (5 stars being the best). Just move your mouse on the stars above and click as per your rating. Your rating will really help us to improve our website. 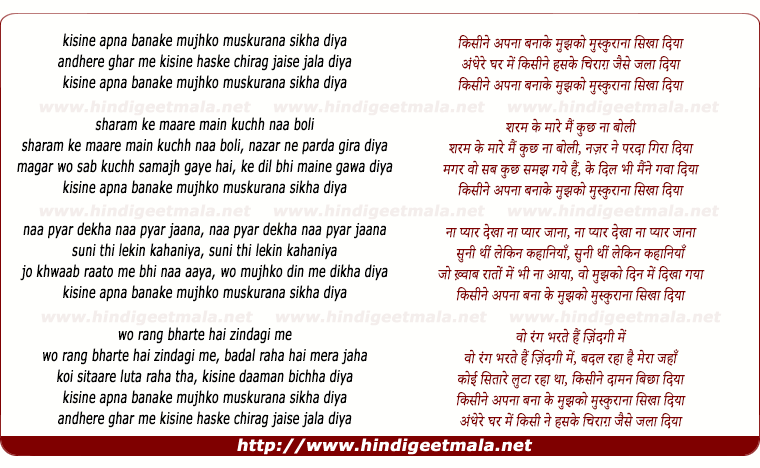 Comments on song "Kisee Ne Apana Banaake Mujhako"
rameshpuri1 on Tuesday, January 25, 2011
this is not a song ..it is a river flowing and the waves are ascending to touch the most senstive cores of your heart...words are like dewdrops reflecting sunshine of joy..one would wish to kiss the pen of the poet shailendra...RG
BharatGul on Thursday, December 02, 2010
Sincere love and gratitude pour out of a woman's heart for a fortunate turn in her life. The endearing smile of Usha Kiran embodies that spontaneity of feeling, and the ethereal quality of Lataji's singing here makes one glued to the sound. The only thing that makes one cringe is the failure of tech experts to remove the sweat stains from the sleeves of UK's blouse. Thanks for the upload.
hira1ft on Wednesday, October 05, 2011
Rumahale ji, you got surprisingly same taste in classical songs and films from B&W era to technicolor in 70's, as that of mine.
There was so much nice music , classy poetry and actors/actresses were graceful and icons of their age.
Many thanks for keeping us in touch with our school and college days, through such lovely songs.
Hope and pray you be getting back your health and spirits!

shafisul on Monday, March 07, 2011
The lilting melody brought to life by Lata Mangeshkar's golden voice is an unforgettable masterpiece.I am a person who loves and have always loved the old Hindi songs,but I, not being from India, do not understand the language.Yet the song is so enchanting to listen to.Thanks for all the comments providing valuable information about the song.
Murtuza H on Tuesday, February 26, 2013
Beautiful lyrics and equally beautiful expressions by the actress on the
screen. "Jo khwaab raton mein bhi na aaya, wo mujhko din mein dikha diya",
aur "Koi sitare luta raha tha, kisi ne daman bichha diya" what a concept,
what an imagination; shukriya Shailendra Saab, aap ko hazaron naman.