Video of this song from youtube
Average Rating : 4.60
Total Vote(s) : 25
Please rate this song between 1 star and 5 stars (5 stars being the best). Just move your mouse on the stars above and click as per your rating. Your rating will really help us to improve our website. 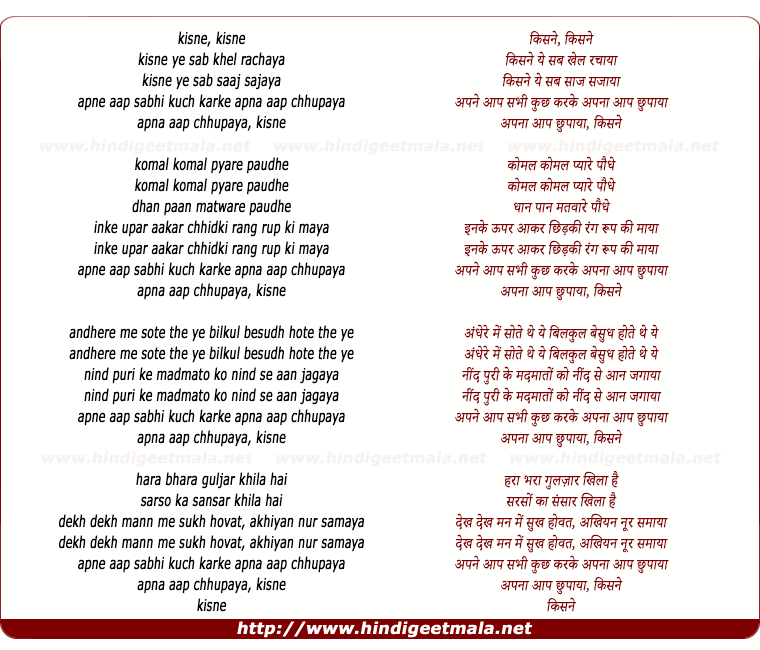 Comments on song "Kisne Yah Sab Khel Rachaya"
Vasantha Ramanathan on Wednesday, December 14, 2011
What is this Khel? God Allah sends his Children with beautiful 7 colors to
play in this World Drama.They started playing this Drama. Slowly the 7
colors started fading. The vices makes the children left with only one
color Black. So now they cannot recognizes what their original Roop.Again
GodAllah comes and gave the colors to his children s hand.They start with
Pure White suddenly all colors return to them. Now they are again ready to
play the Drama.Waiting for the screen to open.Om Shanti.

Vasantha Ramanathan on Thursday, July 11, 2013
Beautiful Presentation Bharat Bhai with beautiful artistic videos to make
the meaningful song into Divine! No words to admire your efforts to show
the RachanaKar to be remembered! He hides Himself to give all credits to
His Divine Children to reveal this World Drama! Wonderful Drama, Actors &
Roles, while watching its full scenes with the third eye, Wisdom! Wah Shiv
Baba Wah! Wah Hamara Bhagya Wah!! Om Shanti & Good Wishes, always.

jasbongy on Thursday, February 25, 2010
Very beautiful song..Excellent Info. about Holi.Thanks ''Possitive
Viberation.'' Thanks Bharat ji.Happy Holi to you and yours. Happy Holi to
all viewers.and friends. 10**********With respect. Sarla.

Bharat Desai on Friday, February 26, 2010
Thanks for nice response, Jasim ji. We can do without tittle Jasim
Bhai..there is ONLY ONE SIR for all of us with whose blessings we are
interacting here on YT. Best Wishes.