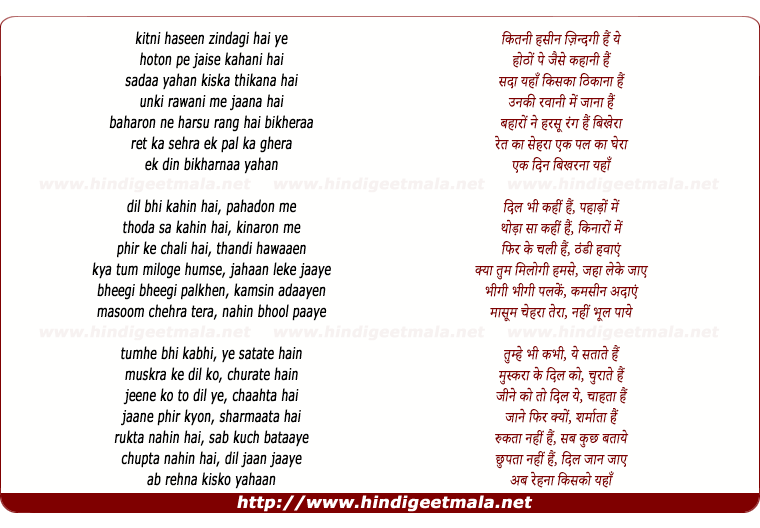 Comments on song "Kitni Haseen Zindagi"
Arunava Malo on Tuesday, April 21, 2015
This song, among a many of Lucky Ali, is a song that actually strums some
strings of heart that we never knew if existed before. That is, the
peaceful melancholy that this song brings to mind, while on a walk beside a
hilly terrain, watching the world through the blurry glass of the bus
window.. or may be while returning home from a tiring day at work.. :)
Absolutely love it.﻿

Ankit Tak on Thursday, June 26, 2014
When i was kid and when i heard his music and watched music video, i use to
think he is the coolest dude on the planet... and i wanted to be cool like
him, when i grow up... Those were just amazing times of life...﻿

upendra prasad on Tuesday, December 01, 2015
One of my favourite songs. I shall rate this song 100 on 100. Lucky Ali
your songs always rocks!!! Love the background music, his way of singing
and the humming naa.. naa.. naaa.. Guitar strings play magic even in this
song along with "I shall be there with you..." song of Lucky Ali.﻿

upendra prasad on Tuesday, December 01, 2015
Is the lady in this video- Malaika Arora Khan w/o Arbaaz Khan? When was
this song released first can somebody tell me? Still I do watch it even at
the end of 2015 and about to enter into 2016. One of my all time favourite
songs.﻿

Sumit26 on Saturday, June 13, 2015
late nineties or today. The magic and soulfulness of Lucky Ali's music
remains unparalleled. Gratitude and respect for the master, and a big thank
you for all the pleasant memories his songs bring back.﻿