Video of this song from youtube
Average Rating : 4.18
Total Vote(s) : 87
Please rate this song between 1 star and 5 stars (5 stars being the best). Just move your mouse on the stars above and click as per your rating. Your rating will really help us to improve our website. 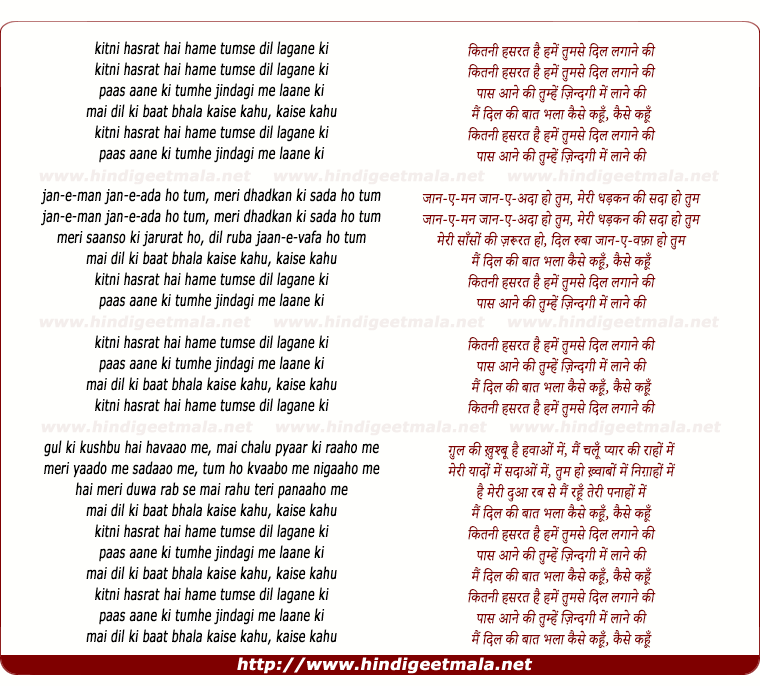 Comments on song "Kitni Hasrat Hai Hame Tumse Dil Lagane Ki"
Rizwan paks on Thursday, August 11, 2011
There are songs that you can listen to and just know that no matter how much life changes around you... the feeling you feel from listening to that songs-- never changes <3
dibyendudas777 on Friday, March 29, 2013
superb songs of kumar sanu. im a great fan of sanu. i want kumar sanu is back on industry. aaj kal ki gaana to sab bekar hai
anupam8002 on Thursday, May 05, 2011
Kumar Shanu, Sadhna Sargam, Sameer, Nadeem-Shravan combination again.
M Y on Tuesday, May 06, 2008
hi, u people know, who is the composer of this movei??? the evergreen
Nadeem-Shravan, who created so many great hits in the decade of 90's which
are still sounding in our hearts, specially with K.Sanu, Alka, Udit, Sadhna
etc. their tones are so melodious that they r stil alive in our hearts even
though being old for 20years now, but still fresh as ever. thei hit moveis
includ Sapne Saajan Ke,Kal
KiAwaaz,Bekhudi,Anaam,Balma,Daamini,Rang,dilwale, etc a long list that
never finishes. Yaseen,beijing

M Y on Tuesday, May 06, 2008
u r 10000% right.i think indian industry cant produce a singer like
k.sanu.he was so melodiou and expert while pronouncing the words.u knw its
not easy to sings with such a big,strong and solid sound, as it need a lot
of energy, but he had done so nicely previously. he was really a clssic and
a complete singer.he gave us so many hits in 90's which are still in our
hearts as fresh as ever. i love his songs, only alongwith Alka.i hate the
modern age singers lke hemish. i hate them. Yaseen,beijing.