Video of this song from youtube
Average Rating : 4.47
Total Vote(s) : 30
Please rate this song between 1 star and 5 stars (5 stars being the best). Just move your mouse on the stars above and click as per your rating. Your rating will really help us to improve our website. 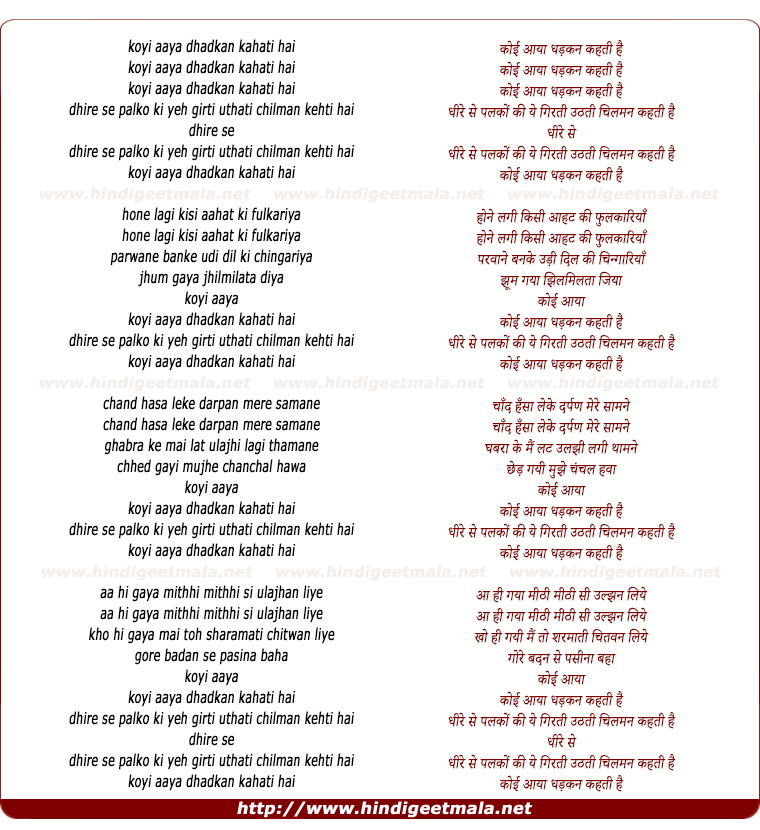 Comments on song "Koi Aaya Dhadkan Kahti Hai"
Milahi1935 on Tuesday, October 02, 2012
Asha must be around 24 years of age when she sang this song. She shows a
lot of potential and has a fresh young voice, which she maintained well
into her seventies. A truly great singer who has not received her real fame
even to this day.

MJN on Friday, May 29, 2009
my all time favourite.only asha can sing like that.first time i
listened that song when Oman tv air waves used to touch My Matli town in
summer time. SD burman at its best.

jab23756 on Saturday, October 22, 2011
i agree.ms. bhonsle another legend ..nobody can be compared
w/her.even though ALLAH made everybody w/diff qualities...2tday's are
also good..in their way...but yester one can't be replace either it's
hemant sir, talat sir and more..whoever loaded these musics my blessing
to them...some of these songs makes u down 2 the memory lane w/good
memories.keep smiling all of u

Ranganathan Srinivasan on Sunday, November 29, 2015
Can you imagine as to why SD chose Asha to sing this song? because Lat one
of the favourite of SD can not sing these variations. A master composition
from SD﻿

Subhash Kothari on Thursday, April 28, 2011
Asha Bhonsle has given her jheart in singing this very beautiful song,
including other famous one .ek hans ka joda, from the same movie.