Video of this song from youtube
Average Rating : 4.35
Total Vote(s) : 95
Please rate this song between 1 star and 5 stars (5 stars being the best). Just move your mouse on the stars above and click as per your rating. Your rating will really help us to improve our website. 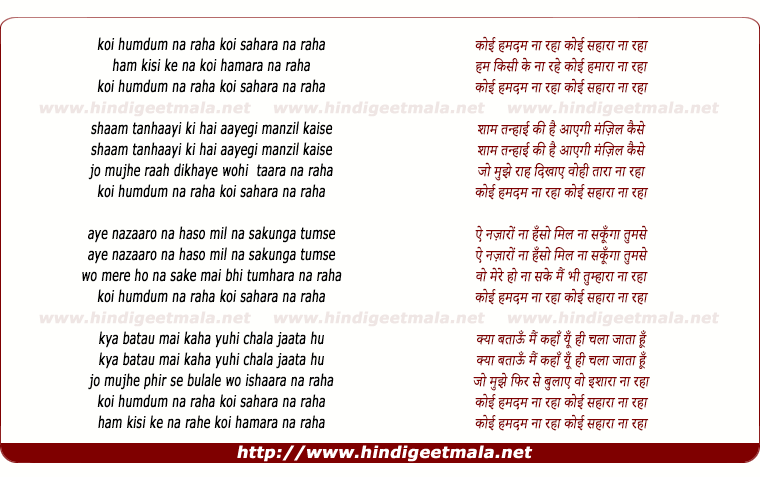 Comments on song "Koi Humdum Na Raha"
Showkat Khan on Sunday, November 07, 2010
This masterpiece created by the versatile KK is a testimony to KK's super
class both as a singer and a music director. Don't understand, why KK did
not do many as a music director; perhaps the answer lies in his complex
character. Let's not get involved in a perennial argument as to who was
better than who; lets be respectful to both KK and Rafi Sahab, both were
unique in their own styles of singing; an argument will simply undermine
the spirit of music and a true lover of music shouldn't do it

Jagjit Singh Ishar on Monday, April 04, 2011
kishor kumar the gr8 legend, singer lyrics writer composer actor producer
director was never recognized & given that place he really deserved &
labelled as a comedian. but during 70s his fame eclipsed rafi sahib to some
xtent. his vast talents r being revered very high now. he is the most
favorit of todays generation. the gr8 kishore da is no more with us but his
songs & his repertoire will always b remembered 2 echoe in the souls &
minds of billions. let his soul rest in eternal peace.

V. Siddhartha on Tuesday, March 10, 2009
KK had a most complex character. Behind his often buffoonish exterior(
which was always an act in his real life too), he carried much wisdom
culled from daily life experiences and observations. When he wanted to , he
could move hearts by bringing all the depth of that wisdom to bear upon his
singing, as he does here. The sadness here denotes wisdom in that it
captures the fragility of all human relations including those in his own
life . A lovely post. Thanks,lethal1985.

K Vineet on Tuesday, July 12, 2011
@nawabzadakalam - mr nawab you are saying my words in different style.. I
already said that Kishore Da did not take any formal music training yet He
is no. 1 singer till today.. there was a time ( between 1971-1977) when
Rafi sahab used to beg for a song because no one was giving him any song to
sing that is why Rafi sahab got hear attack and died. as far as reaching to
God by islam is as wrong as saying you can reach to Ram by worshiping
Ravan.

jagjitisher on Friday, March 12, 2010
an ever green kishore song. so nicely composed y kishore himself. so nice melody wonderful orchestra xlnt arranging & rythm. kishore was an alrounder gem. physically he is no more with us but his songs wll always reverberate in our souls & minds. thanx yuan g 4 the nice upload. but one request is 2 pl load complete song. the song starts with music which is missing & 2 keep pace with the timing sm portion of the song hs bn jumped.
View all 156 comments related to song Koi Humdum Na Raha
Popular Links on HindiGeetMala