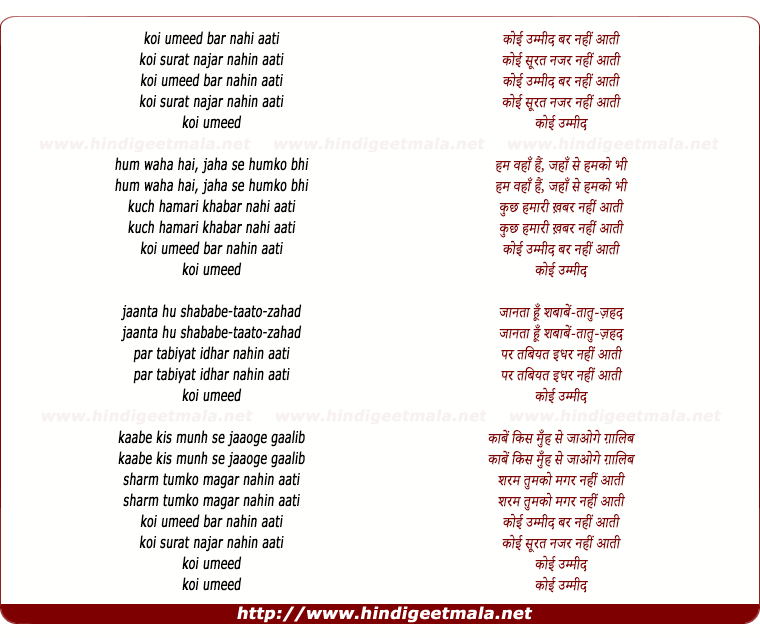 Comments on song "Koi Ummeed"
penta15786 on Sunday, September 23, 2012
Sushant Bhat - Evidently you do not know about recordings. The equipment
used is not at par and when you load on youtube the audio and video does
not sync properly. It then gives the impression to most Indians (who by the
way think are most knowledgeable about music) that the artists are lip
syncing and to pass judgement, like you did. Do not bring hastily arrived
conclusions and opinions which have no place in any discussions.

Abdul Qudus on Monday, August 04, 2014
~175 years ago someone wrote this, many have sung Ghalib, and many will.
Question is, if the poets of today will be sung when it will be 2300 AD. I
can not answer, you can be the judge. But then again you will be gone by
then too & it will be a different world which I can not envision. I wonder
what the Google+ & the Youtube will morph into. Qudus.﻿

oktzai1 on Friday, May 13, 2011
original version by rahat fateh ali khan is far far far far awy awsm than
this one. mtlb rahat put the soul,feelng ov poetry into the song.LAI
is no doubt a gud singr bt for ds 1.. ALI THIS IS NOT FOR YOU MAN SO JST
LEV IT ORIGINLAL

x3mFX3 on Saturday, March 31, 2012
No no this is studio singing, whole video is in sync but bad lipsync. and
the last part was very bad sync. Ali have great voice and great song

abhiiishek on Tuesday, March 04, 2014
Sometimes i wonder why and how untalented people are given a chance to
Sing, Act or even Model...This is one good example of that! ﻿