Video of this song from youtube
Average Rating : 4.42
Total Vote(s) : 948
Please rate this song between 1 star and 5 stars (5 stars being the best). Just move your mouse on the stars above and click as per your rating. Your rating will really help us to improve our website. 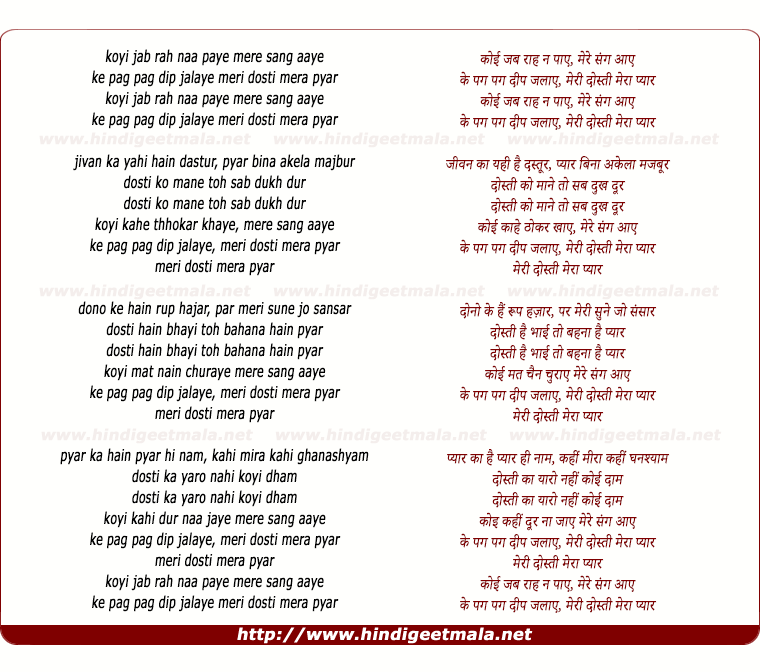 Comments on song "Koyee Jab Rah Naa Paye Mere Sang Aaye, Meri Dosti Mera Pyar"
JazzyKat2009 on Sunday, December 20, 2009
The songs are great, I agree, and Rafi is a superb singer, among the best,
but it was the theme of "Dosti" that made the movie. The friendship between
the two friends that was superbly and emotionally portrayed. But, let me
ask you people, why do you argue, why do you compare... it all comes
together in the end to watching a great movie, with wonderful songs,

dubbooman on Thursday, November 26, 2009
dosti won the filmfare awards in the music category for laxmikant and
pyarelal in 1965. the two films which lost were sangam and woh kaun thi by
shankar jakishan and madan mohan respectively. the one difference between
all 3 movies was the singing by rafi sahib which made all songs of dosti
superhits

rpandher on Monday, February 15, 2010
What a grat movie!! My all time favourite. From direction to acting to music.everything was top quality. These days its all about profits and unfortunately majority of the population these days has a very shallow thinking and is unable to appreciate something as beautiful as this!!
sohalsukhdev on Monday, November 15, 2010
A muse on friendship rarely experienced in real life. Eternal in message, soulful in voice. Long live the memory of Rafi the Great and the actor who picturised it. Pity the modern pictures which dish out hullabhaloo !!!!!!!!!
Sudesh Nirwan on Tuesday, January 04, 2011
@ankabutman it was a nice movie indeed but what you mentioned is absolutely
correct. it is the music for which it is remembered. hats off to the
magical duo of laxmikant pyarelal and genius singer rafi saab.