they will make you drool
they aint no fool, chant hain wo mastaane
and if thats mad its just too bad
sach hai ye solaah aane
so if you wana yeah yeah
dil hain deewaana yeah yeah
one and two and three and four
swing it with me dosto
break free gotta get some chhutti tod do janjiro ko
break free get ready kyon ki aa rahe hain karzzy four 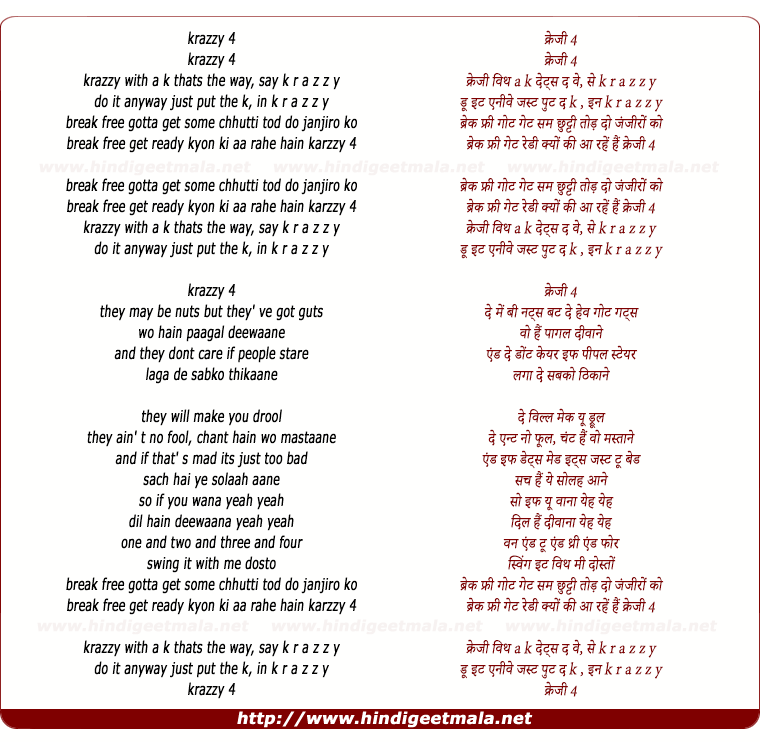 Comments on song "Krazzy 4......."
MrTheRishyrichy on Friday, April 08, 2011
@aimalnizam u r totally wrong... Hrithik more than 4 Million... but shahruk khan only 500 thousand... u have to learn how to account... say the truth... Hrithik in his first debut (KNPH) is box office..and because of him, teenagers and international people like hindi movie... including me.. hindi movie have developed coz of him...with hid sophisticated style and dance... and he is the younger star who has so much awards same level with senior star... and his statue in Madame Wax proved.
henderson2741 on Tuesday, January 27, 2009
A couple years ago a little girl named Annie was killed by her ex-boyfriend because he didn't like the fact she was going out with someone else. He stabbed her in the heart with a knife and slit her throat and she bleed to death. If you don't copy and paste this onto 5 videos wthin the next 30 mins you read this, Annie will come stand next to your bed at midnight and do what her boyfriend did to her, to you. DON'T IGNORE THIS MY FRIEND DID AND SHE WAS FOUND MURDERED BY ANNIE
maxelldemon on Monday, March 29, 2010
@Aditya0789
R u kidding SRK is not good but he is the BEST. It really proved to me witht his song cz i first watched the Hrithik version and I was going ooh and aah but I came on this one and I was completely frozen!
Thats when i guess I realized the true power that sets SRK apart from the whole world!

aimalnizam on Friday, January 22, 2010
there are many links of this song danced by srk n all of them have been seen by viewers thousands of times n Hrithik' version is not that much that is y everyone saw that many times so it is clear that srk is the best even though he is not a good dancer but he has done it amazingly, great job kingkhan
watch21online on Tuesday, April 27, 2010
Oh my god I love this! You guys have got to see the new How to Train a Dragon movie. It is so funny and looks AMAZING in 3D! I just watched it over at "ww w (.) free-full-movies (.) com" and you can too! Send me a message telling me what you think of the movie when your done watching it! Bye!
View all 187 comments related to song Krazzy 4.......
Popular Links on HindiGeetMala