Video of this song from youtube
Average Rating : 4.62
Total Vote(s) : 39
Please rate this song between 1 star and 5 stars (5 stars being the best). Just move your mouse on the stars above and click as per your rating. Your rating will really help us to improve our website. 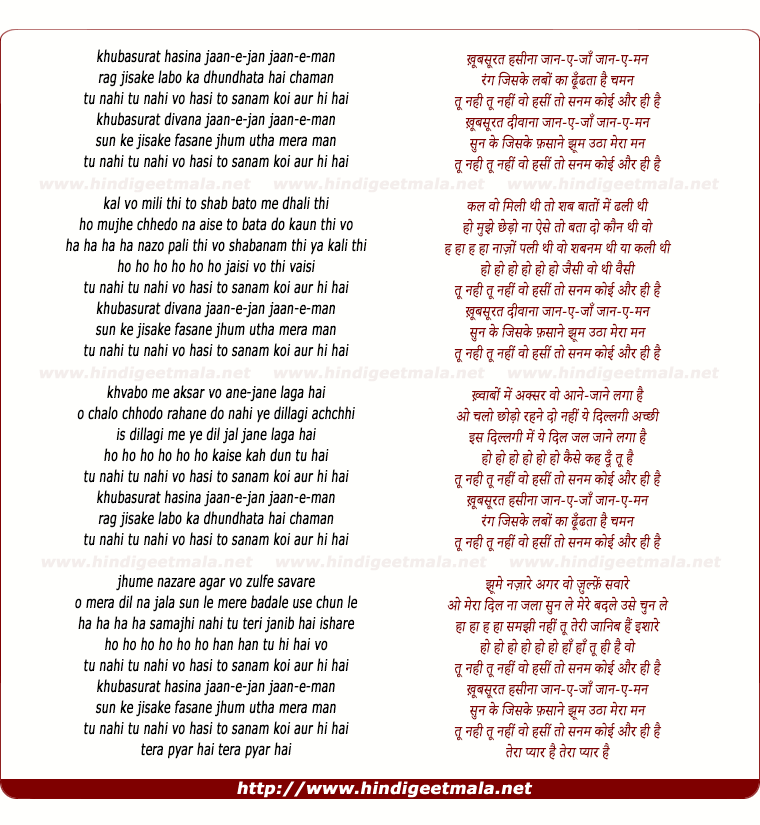 Comments on song "Kubasurat Hasinaa Jaan E Jaan Jaan E Man"
shreekantj4 on Sunday, November 21, 2010
melodious song by kishore and latadidi.beutiful lovely acting by kishore
and kumkum.suiting natkhat lyrics.life becomes enjoyable hearing such
songs.thanks L.P. and all others who have created this melody.For kumkum
she is one of th greatest dancers of film industry.The industry must honour
her with respect.

5thquad on Friday, February 22, 2013
Cmon don't tell me you don't notice the similar tunes. It's brief, the
first four lines only, but the tunes are almost the same. Did Malik "copy"
it? I don't know. But you can't ignore the similarity.

pradeep s. on Tuesday, May 27, 2008
Excellent, romantic, naughty yet touching song. Both Kishore and lata are
great as usual. The lyrics and poetry of Anand Bakshi ji is un- comparable.

peterklus on Sunday, April 13, 2008
Thanks very much indeed, Rajshriji, for posting this terrific song from "Mr
X in Bombay", probably long-forgotten. It's Kishore at his best.