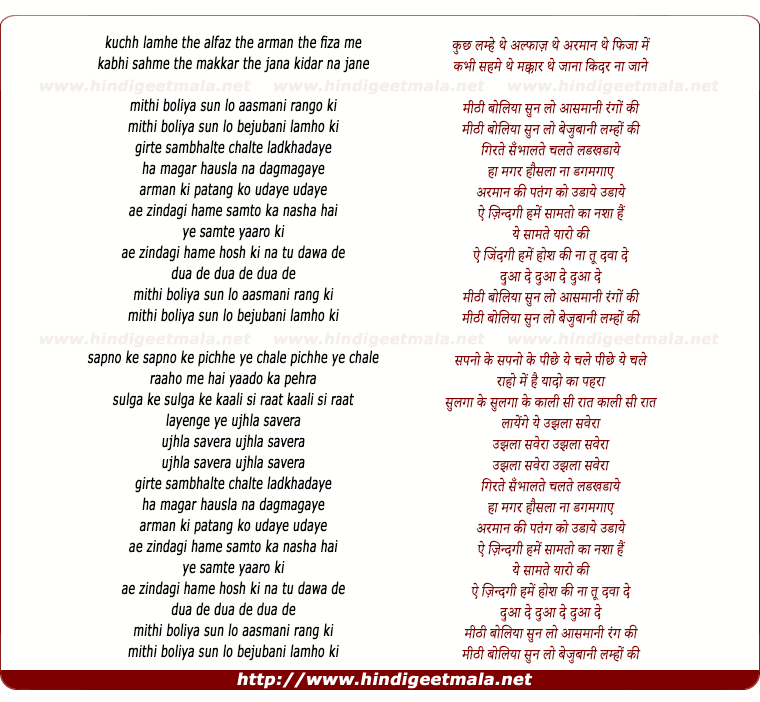 Comments on song "Kuch Lamhe The (Mithi Boliya)"
Kim Dong on Sunday, February 24, 2013
great picturisation...the way he has depicted friendship in this song is just so beautiful.i am sure everyone here would agree that they might hav experienced this kind of moment with their friends...simple yet so touching...especially that part where they take a dive in the waters ...the entire crowd where i was watchin the movie were all clapping and whistling during that scene..
Jaymin Acharya on Wednesday, March 06, 2013
A reason is that the song speaks to its audience upon many levels. As a British NRI, whom has just came back from India. It speaks of when faced with uncertainty, take a fresh challenge and embrace the risk.
Zain Juwale on Saturday, February 23, 2013
ok... problem is ... i feel evil today.. so lets break the suspense.. one of the three friend dies.. muahahahhahah... gues whooo???
MrDeltaNoir on Sunday, February 24, 2013
miss my friends.the movie shows us men, the way we r.
Not pretty-dressed-up-skirt-chasing-punjabi boys as in other bollywood movies(no offence !)

Ibra Suhail on Wednesday, February 27, 2013
harsh- dude I zillion times agree with you
A movie definately worth watching ,its an eye candy..i like each and evry moment of this movie