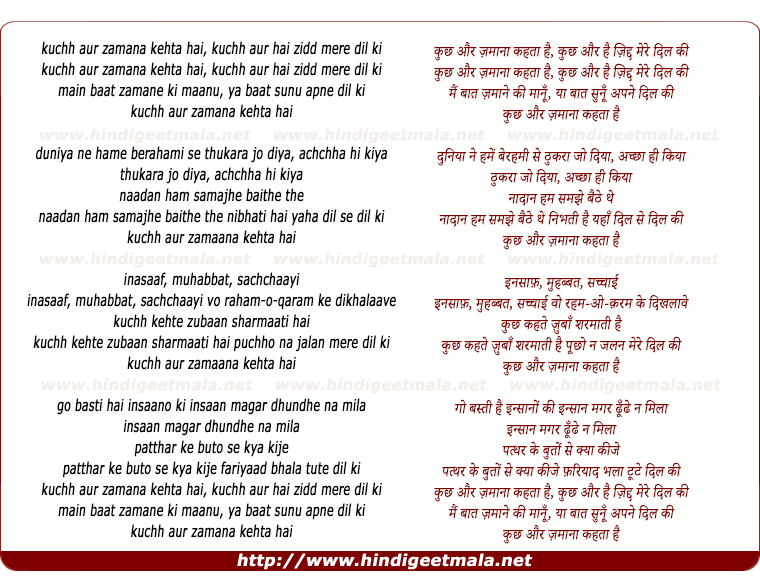 Comments on song "Kuch Aur Zamana Kahta Hai"
rameshpuri1 on Wednesday, December 15, 2010
choti choti batten was made by the most talented and popular actor motilal..this was also the last film anil biswas scored music for..the songs were written by none other than pushkin of hindi cinema..SHALENDRA...motilal did not live to see the release of this film...i saw this film when i was ten years old and yet i have not forgotten this simple and poetic film ..RG
Meha Dalal on Sunday, October 17, 2010
CHHOTI CHHOTI BATEN (1965) MOTILAL, NADIRA, MOTI SAGAR, MAJNU, KUMAR,
MUBARAK, KRISHAN DHAWAN, LEELA MISHRA MARIDULA, SANGITA, MISHRA Produced
By: MOTILAL Directed By: MOTILAL Music By: ANIL BISWAS FAMILY DRAMA,
OFFBEAT, GOOD MUSIC ** Lyrics: Shailendra

dbhat26 on Tuesday, April 07, 2009
Watched this film on Doordarshan sometime in the early nineties...'91 or so. Been looking for this song for years. Lovely song. Wonderful lyrics. Thanks for sharing.
shahsn1 on Thursday, March 12, 2009
thanks so much for this rare beautiful piece - was looking for it for years after having seen it in the 70s on doordarshan - it always had stuck in my memory..
suralaap on Monday, December 15, 2008
What a lovely song. I have always loved this song--somehow this song got erased from
my collection.Thankyou thankyou for this song