Video of this song from youtube
Average Rating : 4.10
Total Vote(s) : 42
Please rate this song between 1 star and 5 stars (5 stars being the best). Just move your mouse on the stars above and click as per your rating. Your rating will really help us to improve our website. 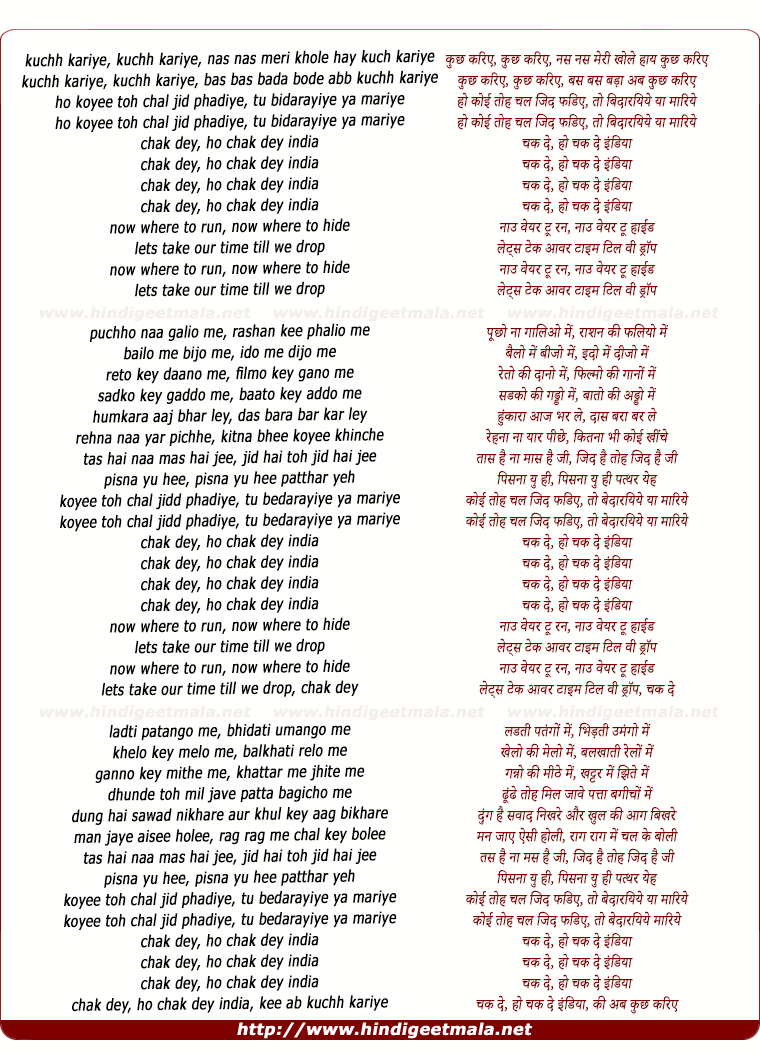 Comments on song "Kuchh Kariye... Chak Dey Ho Chak Dey India"
tarun100191 on Wednesday, March 30, 2011
today when i got up in the morning the first thing i did was transfer this song to my ipod.listened to it the whole time on way to work,replayin it everytime!the feeling was different,like never before.hard to explain.you could just sense that today's match would be the biggest clash in the history of not just cricket but sports!!
aparaajita10 on Wednesday, July 20, 2011
@sls119 the reakity is different from the true nature of India...the
reality isthat the true nature of India has been covered by the attacks
from outsiders, which still continue not only as militari & terrorist
invasios, but even as cultural, religious & financial attacks which
arefacilitated by a corrupted indegenous populatipn & the centuries long
presence of the foreigners whose sole goal is to plunder & own the rich &
very intelligent & scientific rources of ndia,,,& to kee India a slave.

Maddybonbon on Tuesday, November 23, 2010
@TheSsssshhhhh Ahahaa: 123000555@TheSsssshhhhh is your cap locksa button havinï»¿ a seizure or something?
If you didn't know already, Wikipedia is unreliable at best because of misguided 'truths.' And instead of 'searching it up' why don't you just read a few books based on the separation? Look into whose decision it ultimately was and how Gandhi reacted to it. If you're capable of that, of course. We wouldn't want to explode your meager brain with a blast of knowledge now do we?

Mehr Megha on Sunday, August 22, 2010
@iamsrk RT I said we were developing...now we are amongst the world
leaders. Each nation has to go through stages. We went through ours.
There's nothing wrong about celebrating our achievements, irrespective of
the measure. We have a reason to celebrate in what we believe. So far, we
have done very well. But we are not the leading light. We have lit a spark.
But I am sure in another five to six years we will get brighter. nice
message by Shah Rukh