Video of this song from youtube
Average Rating : 4.69
Total Vote(s) : 13
Please rate this song between 1 star and 5 stars (5 stars being the best). Just move your mouse on the stars above and click as per your rating. Your rating will really help us to improve our website. 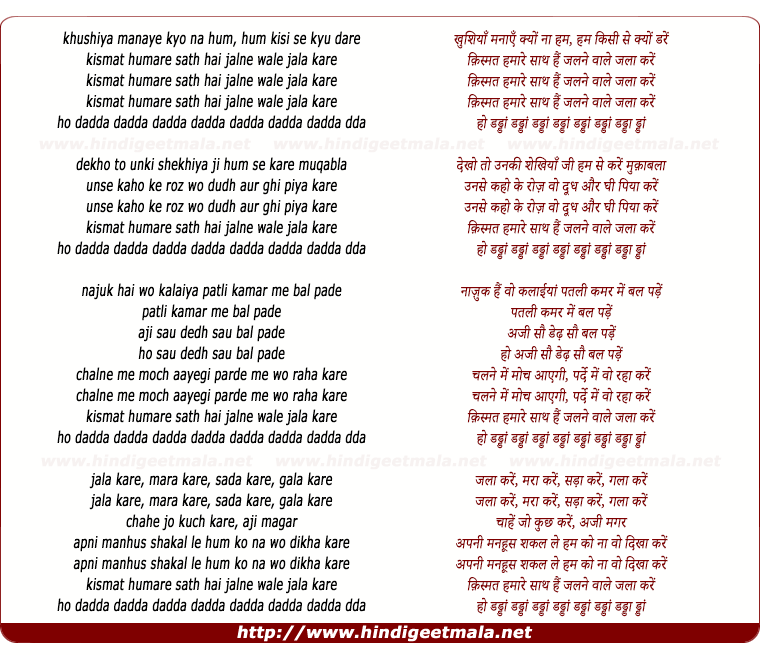 Comments on song "Kushiyaan Manaaen Kyon Naa Ham"
umraochalsani on Friday, July 16, 2010
Million thanks for this rare song, for which I have been searching for
decades. Why? I was just 8 yrs old, not knowing Hindi when the film was
released. Then , later came "Jeevitham", by AVM productions,
Vyjayantimala's first film, dubbed from its Tamil version. This tune was
adapted in both versions. i t was a resounding hit all over south with
children and adults crazy about it. Elders used to say it was copied form
khidki of CR, but, I could never verify this till now, thanks to you

cumrao on Tuesday, August 23, 2011
You may be right about Vazhakai. But certainly, The Telugu version was
Jeevitam Which I saw recently also With this tune, and there was definitely
no NTR. I think you have in mind another VM film, Sangham in Telugu, and
later,Ladki in Hindi with VM, Anjalidevi and Bharat bhushan and Kishore.
Ladki has music by R.Sudrasanam, Dhaniram, and CR, all 3. There might have
been an original Tamil version. As you say, all these 3 are separate
productions.

cumrao on Tuesday, August 23, 2011
Further, the Hindi version of Vazhkai-Jeevitam was not dubbed but might
have been remade as Bahaar with VM, Padmini, Karan dewan, and Omprakash,
with SDB music. I remember it so, But I am not 100% sure about this. But,
what I said in my previous post was sure.

Ashok Kulkarni on Wednesday, November 11, 2009
Thanks for posting this song. I was looking for the songs from Khidki for a
long time. Please post other songs if available. A.K.Kulkarni73

Subhash Chandra on Wednesday, September 15, 2010
wow, kahan se dhoondh ke laye janab, use to listen on Radio ceylone. Thanks
a lot for sharing...