Video of this song from youtube
Average Rating : 4.25
Total Vote(s) : 48
Please rate this song between 1 star and 5 stars (5 stars being the best). Just move your mouse on the stars above and click as per your rating. Your rating will really help us to improve our website. 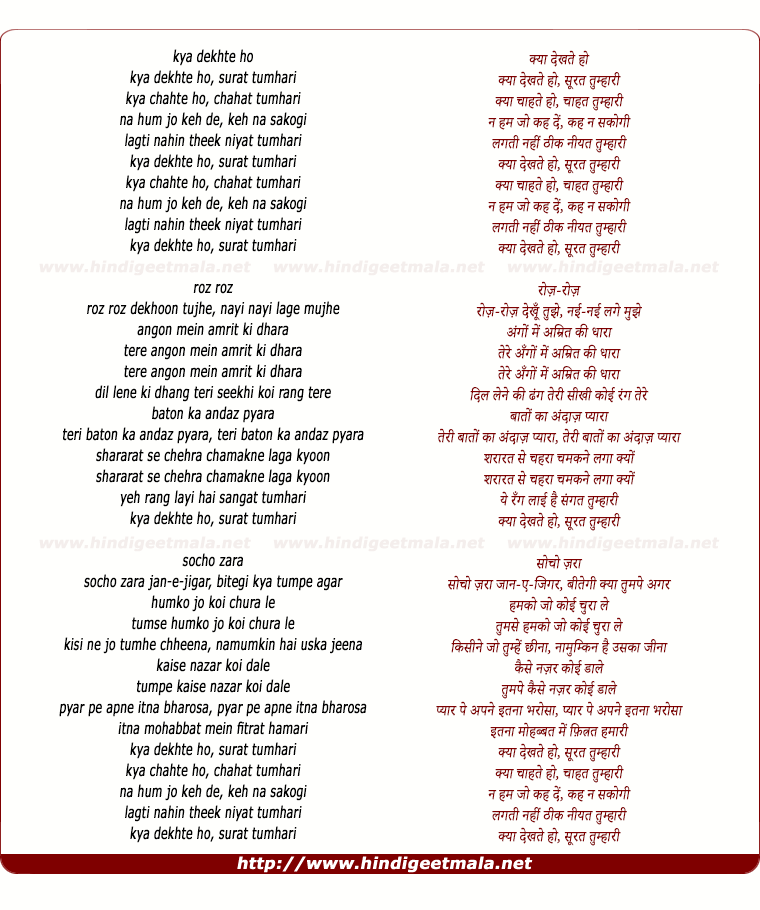 Comments on song "Kya Dekhte Ho"
janingrigory on Wednesday, January 30, 2008
Totally agree kiizzito. Zeenat has so many international fans, me included. Zeenat Aman was one of the main reasons I fell in love with Bollywood in the first place. She is a gem to be treasured. Nowdays everyone is into Aishwarya, but Zeenat was the very first Bollywood star who truly had international appeal thanks to her amazing good looks, modern appeal, worldliness, and trendsetting ways. People need to start addressing legends with more respect.
janingrigory on Monday, January 28, 2008
There were other actresses, such as Rekha for example, that have done far 'worse' scenes in terms of sensuality than Zeenat has EVER done (and I have all of Zeenat's movies so I know) but they are never criticized. It's because Zeenat has potent beauty and a perfect figure but she is a liberated, sophisticated and strong woman so people are just jealous of her!
janingrigory on Monday, January 28, 2008
I don't particularly care for Parveen Babi nor will I say anything to her defense. But Zeenat was has always been a sophisticated and professional lady, also very articulate, well-read and well-spoken. As an educated and self-respecting woman myself with good values, I admire her courage, self-confidence, and daring nature to serve as a pioneer.
janingrigory on Thursday, December 20, 2007
The most stunning and stylish goddess of Bollywood with the most perfect body of any actress EVER! Zeenat's hotness cannot be matched or equalled by any other actress! Legend, beauty queen, a total original, a confident siren! Love her totally cute outfit and she has great chemistry with Feroz Khan!
janingrigory on Friday, December 21, 2007
Zeenat's beauty is natural all the way, from head to toe. That's what makes her a "real" hottie cause she didn't go under the knife like today's fake and plastic-like actresses who buy their looks! She didn't need to enhance anything cause she was naturally perfect:)
View all 108 comments related to song Kya Dekhte Ho
Popular Links on HindiGeetMala