Video of this song from youtube
Average Rating : 4.33
Total Vote(s) : 33
Please rate this song between 1 star and 5 stars (5 stars being the best). Just move your mouse on the stars above and click as per your rating. Your rating will really help us to improve our website. 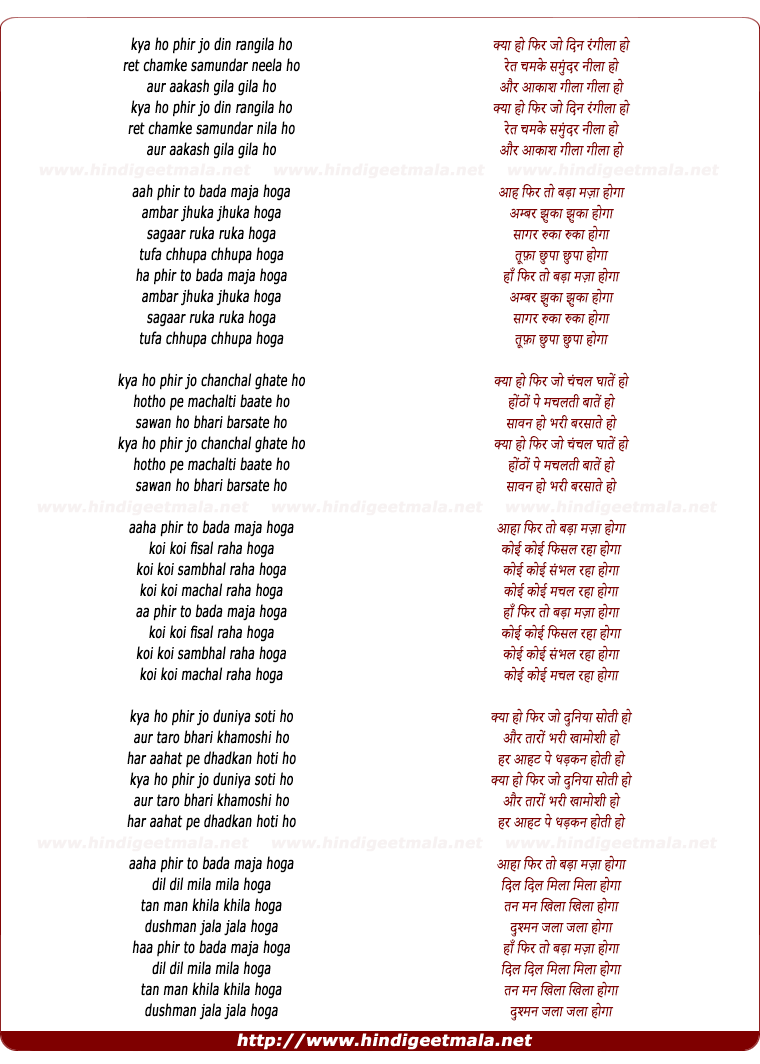 Comments on song "Kya Ho Phir Jo Din Rangila Ho"
Surender Bhutani on Sunday, May 17, 2015
A nice song and it is beautifully picturrised by Goldie Vijay Anand. The
dance director Surya Kumar is also visible when he is dancing with Helen.
Surya and Helen did a wonderful song together again "Mera Naam chin chin
chu" in Howrah Bridge.

Flagfalls on Saturday, June 08, 2013
Vijay Anand was a master at song picturization. He truly hit a sixer in his
debut film. The choreography & picturization are so splendid that they put
all of today's song-and-dance numbers to shame. Of course, SD's beautiful
music also deserves credit.

Flagfalls on Tuesday, July 03, 2012
My favourite song from this movie. Very underrated and forgotten,
unfortunately. In fact I didn't know that it existed, until recently.

Coucoutchicou on Wednesday, March 09, 2011
I've always loved this song, which didn't get the popularity it deserved..
Many thanx for the upload.

psur47 on Tuesday, June 01, 2010
They don't make them like this any more. What a fantastic "cabaret" song - the very best ! The best cabaret songs were made in the fifties Geeta Dutt is brilliant and it was the genius of S.D. Burman to recognize that this song needed TWO singers - one for Shashikala and one for Helen. Is there another combined Geeta Dutt, Asha Bhosle song ?
View all 12 comments related to song Kya Ho Phir Jo Din Rangila Ho
Popular Links on HindiGeetMala