Video of this song from youtube
Average Rating : 4.69
Total Vote(s) : 54
Please rate this song between 1 star and 5 stars (5 stars being the best). Just move your mouse on the stars above and click as per your rating. Your rating will really help us to improve our website. 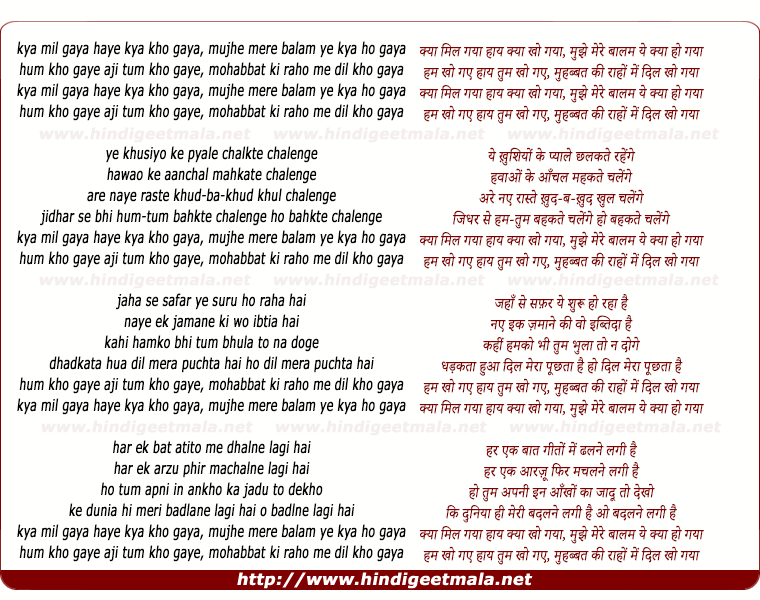 Comments on song "Kya Mil Gaya, Haye Kya Kho Gaya"
V. Siddhartha on Tuesday, March 10, 2009
In rough translation, the first few lines are: Woman: What have I found?
What have I lost? O, my beloved what has happened? Man: I am lost, you are
lost Our hearts have lost their way on the path of love W:These cups of joy
will remain effervescent The embrace of these breezes will remain fragrant
M:New paths for us will open up by themselves Whichever way you and I
happen to wander into, intoxicated[ with love]. (The rest, too, is all
romantic expression but in different words).

THOUGH EVERY STATE IN INDIA WOULD HAVE HAD THEIR "BOLLYWOOD" FILMS FEATURED
ALL AROUND IN INDIA.

GUESS WAS THE MEGA LOCATION FOR CHURNING OUT LOAD'S OF
MOVIES!!
U.K.(Indian movies researcher).

THANKS FOR THE POSTING.﻿

V. Siddhartha on Tuesday, March 10, 2009
A song dripping with sweet romance , but clean as a fresh mountain stream.
Not even a remote trace of vulgarity in the scene. Though it is typical
Bollywood masala in conception, it is the overall cleanliness of
presentation that makes old Bombay cinema precious to many old-timers like
me.