Average Rating : 4.21
Total Vote(s) : 34
Please rate this song between 1 star and 5 stars (5 stars being the best). Just move your mouse on the stars above and click as per your rating. Your rating will really help us to improve our website. 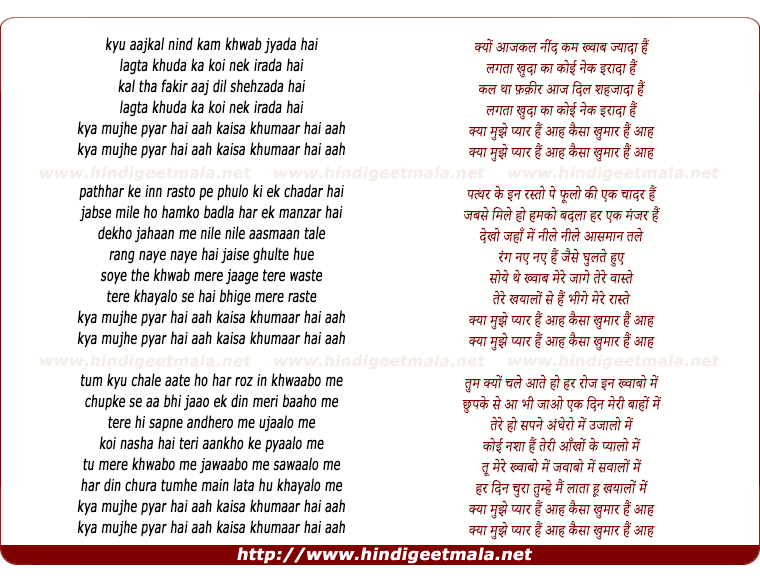 Comments on song "Kya Mujhe Pyar Hai Aah Kaisa Khumaar Hai"
Ambarish Ravi on Friday, September 03, 2010
@rodungp haha. dude. what do you mean most of them are honest and have
integrity. our honesty and integrity is always confined to our homes and
families and friends. when it comes to public life or public affairs,
everyone of us steps out of the line. look around you mate. Everybody
bribes, lies at work, tries to shirk work, copies in exams, tries to not
pay for things they should. I am talking about the common man. we need to
be taught honesty and integrity even outside the sphere of our house

I. Mursalin on Sunday, May 17, 2009
hey you all, I'm glad 'though this Hindi version of Indonesian Peterpan's
song has made lot of controversion, by the end we can get to know other
culture ... that's the beauty of this life, different countries, ethnics,
languages, cultures and different religion ... and you know what? despite
all those diversities, it doesn't mean that we have to boo and hate others
... just enjoy 'em, 'cos God made that since the first time He created
universe and human kind ...

I. Mursalin on Monday, May 18, 2009
on this point, I agree w/ you as far as I read on the net, that this
so-called "pritam" guy has violated the right of atleast two indonesian
band/singers' songs ... not to add other foreign songs (forgot what are
those, just do a google search on this) the point is, this kind of
plagiarism acts must be considered as crimes, no mather who does this or
which nationality he is (that's include plagiarism done by some from
indonesia, my country)

madnbadboi on Sunday, March 14, 2010
Gian93Carlo
U r saying that bollywood copies music and movies from around the world. but you might not know that bollywood makes about 1000 movies per year (average). so probably it makes bout 4000 songs averagly ( 4 per movie). so it makes 4000 thousands songs.. only bout 200 are copy... but what bout 3800 songs which r original work.. WE ALL KNOW THAT BOLLYWOOD HAS LOTS OF TALENTED DIRECTORS, SINGERS AND ACTORS.. !

davisarren on Friday, June 12, 2009
Hi, Indian guy here. I love listening to music from other languages. I have to admit though english songs are going to sh*ts right now. Listened to both versions, and i think the indonesian version is more true to themeaning and sounds better. Maybe because thats the way it was originally intended to be. Plus i think this is the second song Pritam copied of this same band - Peterpan.
View all 255 comments related to song Kya Mujhe Pyar Hai Aah Kaisa Khumaar Hai
Popular Links on HindiGeetMala