Video of this song from youtube
Average Rating : 4.75
Total Vote(s) : 44
Please rate this song between 1 star and 5 stars (5 stars being the best). Just move your mouse on the stars above and click as per your rating. Your rating will really help us to improve our website. 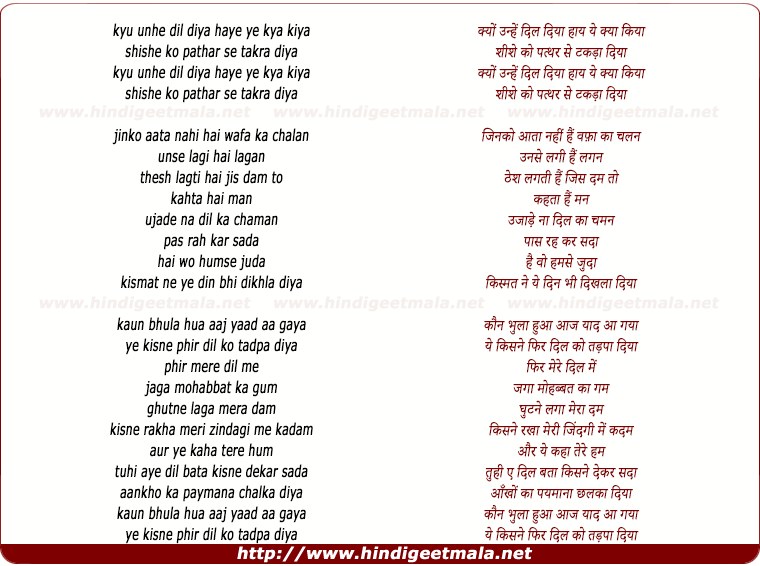 Comments on song "Kyu Unhe Dil Diya Haye Ye Kya Kiya"
Colonel Rao on Saturday, August 25, 2012
Surendranathji was very accomplished actor singer and in his first film
Deccan queen was asked to sing Song Birhaki aag lagi more man mein..
excatly like KLSaigal sahib and he did it. It was history and a Bombay
Saigal was born.No doubt he was Saigal devotee and all his songs have the
touch. He was BA LLB and wanted to pusue career at courts. But destiny
brought him to films. He was highly successful in his career and commanded
great respect.

Bharat Gul on Thursday, May 03, 2012
The golden voice of Surendra. He often sounds as if he was a KLS devotee,
so close does he come to the legend. Sweet,sweet accompaniment from
Shamshad Begum.( I learned once that Surendra had a law degree and in
formal writing always added LL.B after his name. Must have looked wistfully
at his un-pursued career in law .) Thanks, Ajay.

rumahale on Monday, November 24, 2014
This certainly draws me to down memory lane; I am familiar with this song,
thanks to Radio Ceylon (SLBC), but viewing video is really wonderful
experience. Thank you for one more excellent presentation and for keeping
memories alive.﻿

Bharat Gul on Thursday, May 03, 2012
How emaciated those bullocks look ! The pitiable beasts of burden have to
pull not only a huge cart of hay, but a disabled car in tow. How unfair we
can be to our enslaved animals !

Priya MyMusicalHeaven on Saturday, December 27, 2014
Such a beautiful song -- the voices, music and lyrics, all came together to
create a song that hasn't lost its appeal to this day. Thanks, Ajay.﻿