Video of this song from youtube
Average Rating : 3.61
Total Vote(s) : 774
Please rate this song between 1 star and 5 stars (5 stars being the best). Just move your mouse on the stars above and click as per your rating. Your rating will really help us to improve our website. 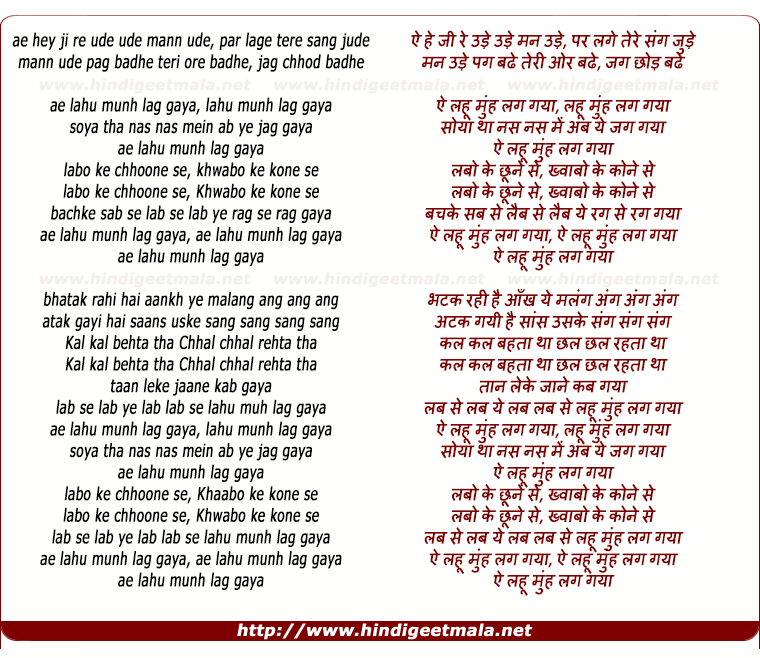 Comments on song "Lahu Munh Lag Gaya"
ajith rav on Monday, November 25, 2013
Whoever out haven't watch this movie yet you guys are doing biggest mistake
in your life,
because movie is priceless in every aspect story,music (grand music) and
acting .What to say if you acting under Leela u have to give your soul
to character which they did ,u wont feel like watching movie u will like
everything happening in front of your eyes !! Ravi Varman another person
should not forgotten to mention !! How did bring he fit so much colors in
one frame ?and without get messed up !! It was a magical and Grand salute
to u sir !! Dont wait !! go watch it before they gone forever from big
screens !! ﻿

Sanjay Kumar on Friday, November 01, 2013
Now-a-days Sanjay Leela Bhansali's movies have no charm...actually he makes
movies only for him not for audience...so there is no appeal in his
characters...all looks fake and exaggerated...these two good actors looks
plastic dolls and completely wasted...just watched now Shahid-Sonakshi
starrer song "saaree ke fall saa"...Director successfully splashed the good
chemistry on the screen between these two actors...there was smile on my
face while watching the song...but Sanjay miserably failed...

st jude on Sunday, October 13, 2013
Please Kindly see thewarningsecondcoming dotcom "My sorrow at this time is
great as all that was foretold by me during the apparitions at La Salette
and Fatima are now unfolding before you all, but many of you are blind.
Those of you who dedicated hours before me at my most holy shrines must
come and ask me, your Mother, to open your eyes to the Truth. You must ask
me to consecrate your hearts and souls to my Son, otherwise you too will
deny Him. Your beloved Mother Mother of Salvation "

M. Adil on Wednesday, October 23, 2013
Oh come on. Ranbir is not Shahrukh. He did a few good films but he's not
very versatile. His movies had great content. His acting didn't do wonders.
Shahid is not the new salman at ALL. Shahid doesn't have the body or the
charisma (He is good but nowhere near that). Ranvir, on the other hand, has
great acting skills, body and keeps playing with roles. He's gonna come out
as the next Amir Khan if he continued like this.