Video of this song from youtube
Average Rating : 2.50
Total Vote(s) : 2
Please rate this song between 1 star and 5 stars (5 stars being the best). Just move your mouse on the stars above and click as per your rating. Your rating will really help us to improve our website. 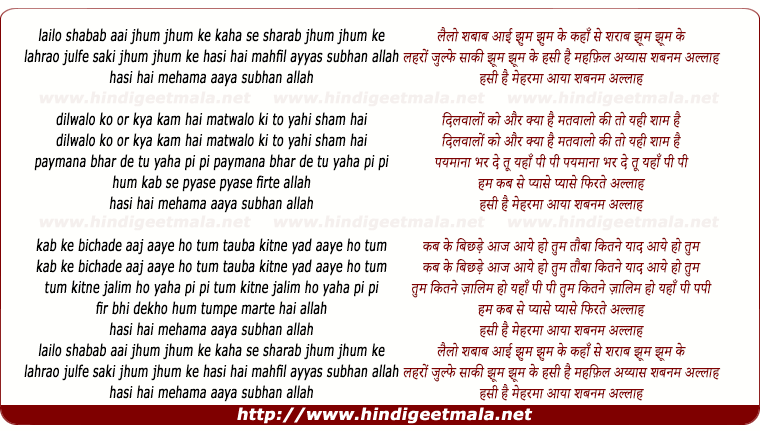 Comments on song "Lailo Shabab Aayi Jhum Jhum Ke, Kahaan Se Sarabh Layi Jhum Jhum Ke"
ahmad nbhan on Tuesday, August 21, 2012
The only countries in the GCC Arab nations of the world there is no alcoholic drink them (Alowskyalekholy) why this distortion we Arabs and the people do not know, but we find generosity and good
We are the sons and manhood AÃºhh or faithful soldiers and Mohammed is his prophet Allahu Akbar Allahu Akbar

aparaajita10 on Friday, June 18, 2010
@kukdikukdi arabs like to do the only thing they can do...f***, and that is
what they do to whatever they touch, c***, people, land, themselves, does
not matter. That is all they are capable of doing

ahmad nbhan on Sunday, September 09, 2012
Kuwait and the Kingdom of Saudi Arabia They have no wine sold openly and
Arab mother, Muhammad is the messenger of God do not like wine and dance
Damn you What is distortion