Video of this song from youtube
Average Rating : 4.47
Total Vote(s) : 45
Please rate this song between 1 star and 5 stars (5 stars being the best). Just move your mouse on the stars above and click as per your rating. Your rating will really help us to improve our website. 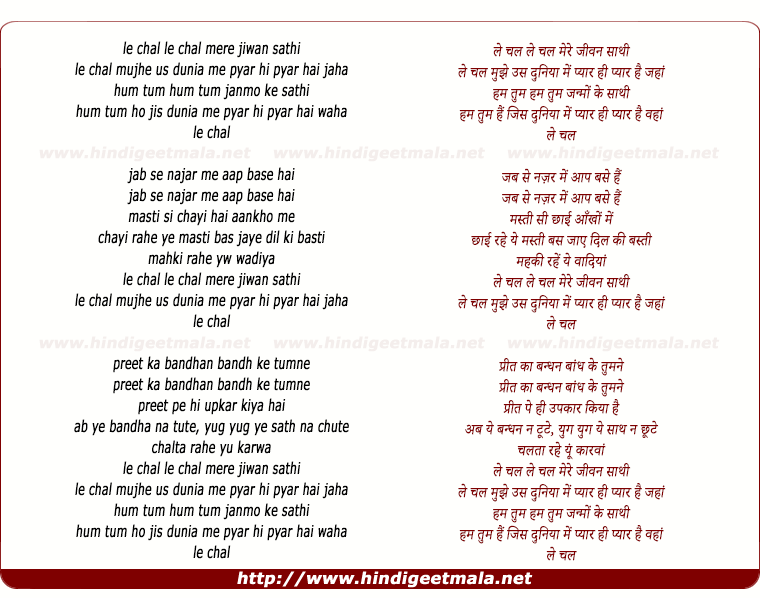 Comments on song "Le Chal Mere Jivan Sathi"
Sreepada RAMA NAGESWARA RAO on Saturday, February 21, 2015
A VERY NICE SONG WITH MELODIOUS VOICE OF BOTH MUKESHJI AND HEMLATAJI
PARTICULARLY FROM FILM 'VISHWAS' - 'LE CHAL LE CHAL MERE JEEVAN SAATHI'
MUSIC BY KALYANJI ANANDJI OF LATE 60s. ONE OF THE MOST LIKING SONG I AM
LISTING FROM MY CHILDHOOD AND I LISTEN IT FOR EVER. GULSHAN BAWARJI WRITTEN
THIS SONG VERY NICELY.﻿

Naveen Dighe on Thursday, December 04, 2014
THE BEAUTIFUL SIMPLE LYRICS ARE BY THE HUGELY TALENTED GULSHAN BAWRA WHO
WAS ALSO A VERY TALENTED ACTOR ﻿

Rasheed Ahmed on Wednesday, July 30, 2014
What a mind blowing song.this song is as if it was brought down from
Heaven,what a wordings/Lyrics.very nice voice combination of Mukesh and Hem
Lata which is very rare.these kind of songs can be heard over n over again
n again without getting bored.The more u listen the more taste u get out of
this song.very pretty actress too all natural look too.﻿

armalyte on Wednesday, December 05, 2012
bahut achaa gaana hai bhai...it reminds me of when i was a kid , and my dad
had it on an old reel to reel tape recorder.

Roy Badal on Thursday, December 06, 2012
Hi dear, thanks a lot for spending your time in visiting my channel...
thank you for the comment..ENJOY