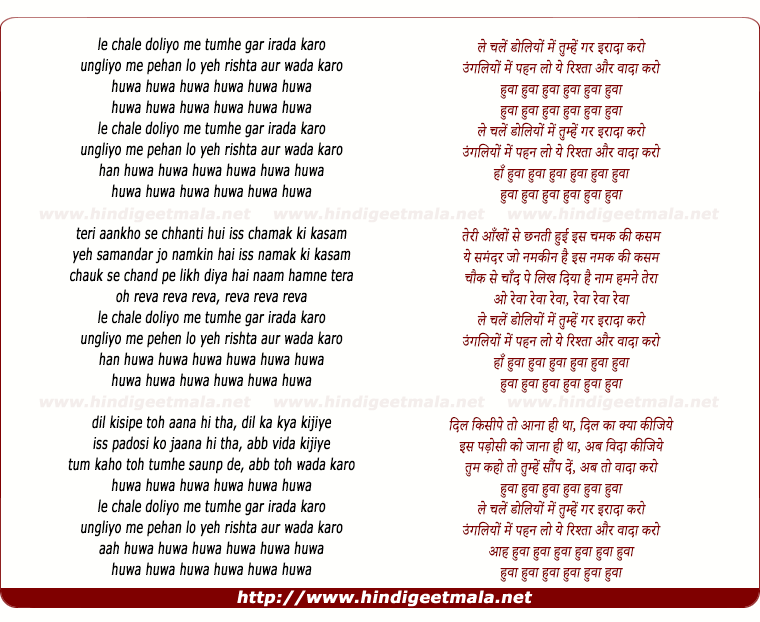 Comments on song "Le Chale Doliyo Me Tumhe Agar Irada Karo"
sarmin23 on Monday, April 28, 2008
Very very nice song, thanks 2 balasubram 4this song upload, do anybody can tell wo is the singer this song,i want 2 know,
thanks
sarmin

911ness on Tuesday, April 07, 2009
so they used the same instrument? many hindi songs have interludes with that instrument. I believe it's called the santoor. It's common to play it in wedding songs like waha waha ramji and since this song is saying "le chale dholiyon mein tumhe" it's not surprising that Anu chose to include it. You can't say he's copying just because he's using an instrument that isn't as common as the tabla. Legends like RD Burman saab added santoor interludes to their songs.
911ness on Tuesday, April 07, 2009
So you could then argue that Ram Laxman (music director of hum aape hain kaun) copied works of RD.Burman or previous directors.. OR you could say noone is copying. They're simply paying tribute to a great Indian classical instrument. and frankly, the santoor is used differently in this song than in waha waha ramji so I fail to hear the resemblance.
williamdarci on Wednesday, January 14, 2009
kash yeh rishta usne bhi pehna hota.
pata nahi kisi aur ko kaise pehna paunga yeh rishta, yad teri zaroor ayegi, teri tasveer samne zaroor ayegi.
darte hai, kahin ankhen bhi dhoka na de palko ko us waqt.
" "

sarmin23 on Sunday, May 18, 2008
Thanks to u to send the singer name. can u upload some K S chitra hit boliyood hindi movie song, cause i love her song. very sweet.
Sarmin23