Video of this song from youtube
Average Rating : 4.58
Total Vote(s) : 19
Please rate this song between 1 star and 5 stars (5 stars being the best). Just move your mouse on the stars above and click as per your rating. Your rating will really help us to improve our website. 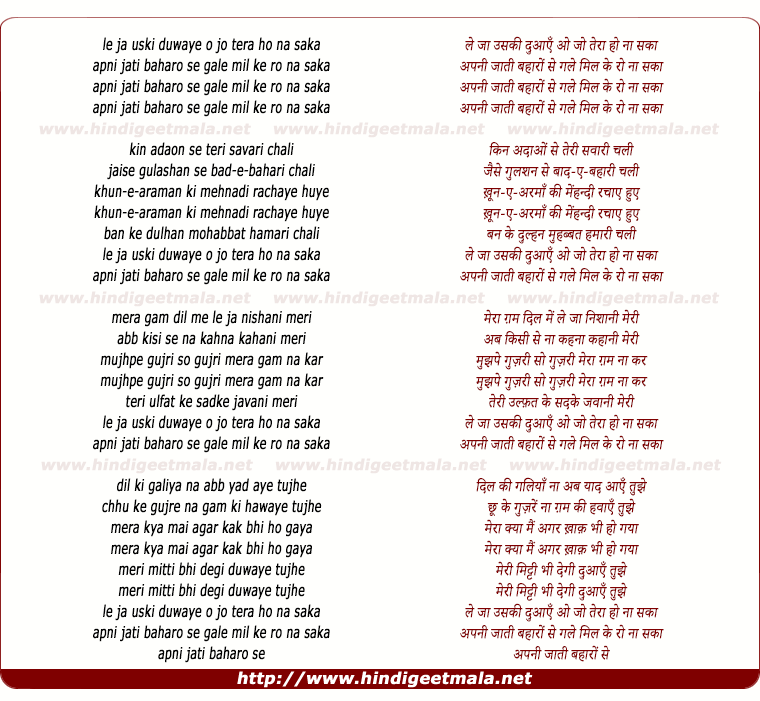 Comments on song "Le Ja Usakee Duwaye O Jo Teraa Ho Naa Saka"
reverseswing on Tuesday, August 05, 2014
To the best of my knowledge HEER is the only film in which Mohammad Rafi
sang under the Music Direction of Anil Biswas. According to some sources
Anil Biswas tuned the song but decided to stay away from the recording
session and this work was completed under the supervision of his assistant
Ram Das. ﻿

crazyoldsongs on Monday, May 03, 2010
an immortal gem ! young voice of rafi sounds heavenly with soulful
rendition of such heartwrenching lyrics . beautiful composition with
minimum use of instruments . thanks a lot

rumahale on Wednesday, January 25, 2012
@pankajtiwari2 Thanks for very nice comments and liking. Naya Daur was a
later production in the year 1957. The song mentioned here is also
beautiful.

rumahale on Monday, May 03, 2010
@crazyoldsongs Thanks for liking and beautiful comments. All in all it is a
great experience. First comments also makes ever lasting memories.