Video of this song from youtube
Average Rating : 4.75
Total Vote(s) : 55
Please rate this song between 1 star and 5 stars (5 stars being the best). Just move your mouse on the stars above and click as per your rating. Your rating will really help us to improve our website. 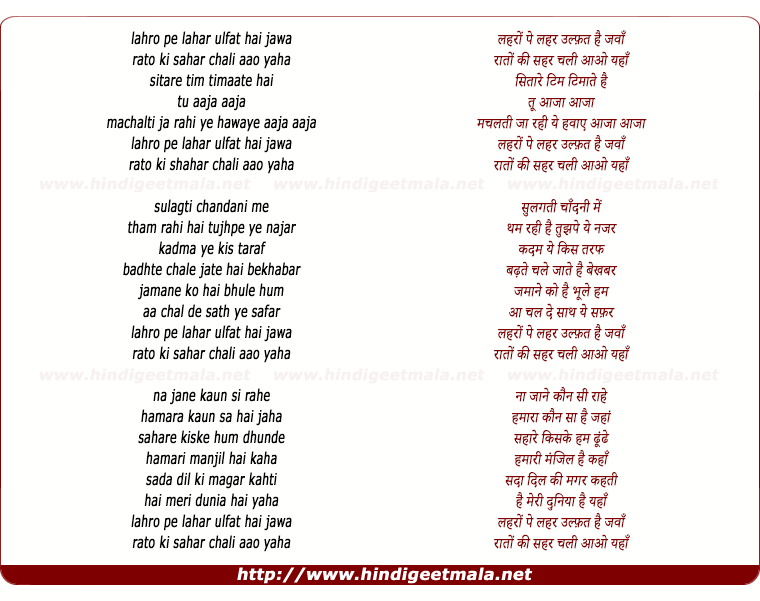 Comments on song "Lehro Pe Lehar Ulfat Hai Jawan"
Bharat Gul on Tuesday, February 08, 2011
A splendid duet, with Nutan herself singing. In the last years of her life
she also composed and sang some bhajans . Pretty sweet voice, isn't it?
Such a stellar person, so gifted in every way . Thank you for sharing
another rare find, ajayuv.

Nayan Yagnik on Tuesday, February 08, 2011
I think Nutan had also sung a couple of more songs in this entertaining
Comedy/ Crime movie! Where can we get the video of this film, produced &
directed by Shobhana Samarth?

AppaRao Venkata Vinjamuri on Thursday, February 10, 2011
Nutan sung one song for telugu film Chilka gorinka. But notacted in any
telugu films. Originol English song of this songisthere in my play lists.
Thanks for reminding me.

R Nanjappa on Tuesday, January 21, 2014
This is surely based on 'THE MAN WHO PLAYS THE MANDOLINO'. Please listen to
Dean Martin sing this. (1957) Of course Snehal Bhatkar has made changes and
he is good.﻿