Average Rating : 4.30
Total Vote(s) : 20
Please rate this song between 1 star and 5 stars (5 stars being the best). Just move your mouse on the stars above and click as per your rating. Your rating will really help us to improve our website. 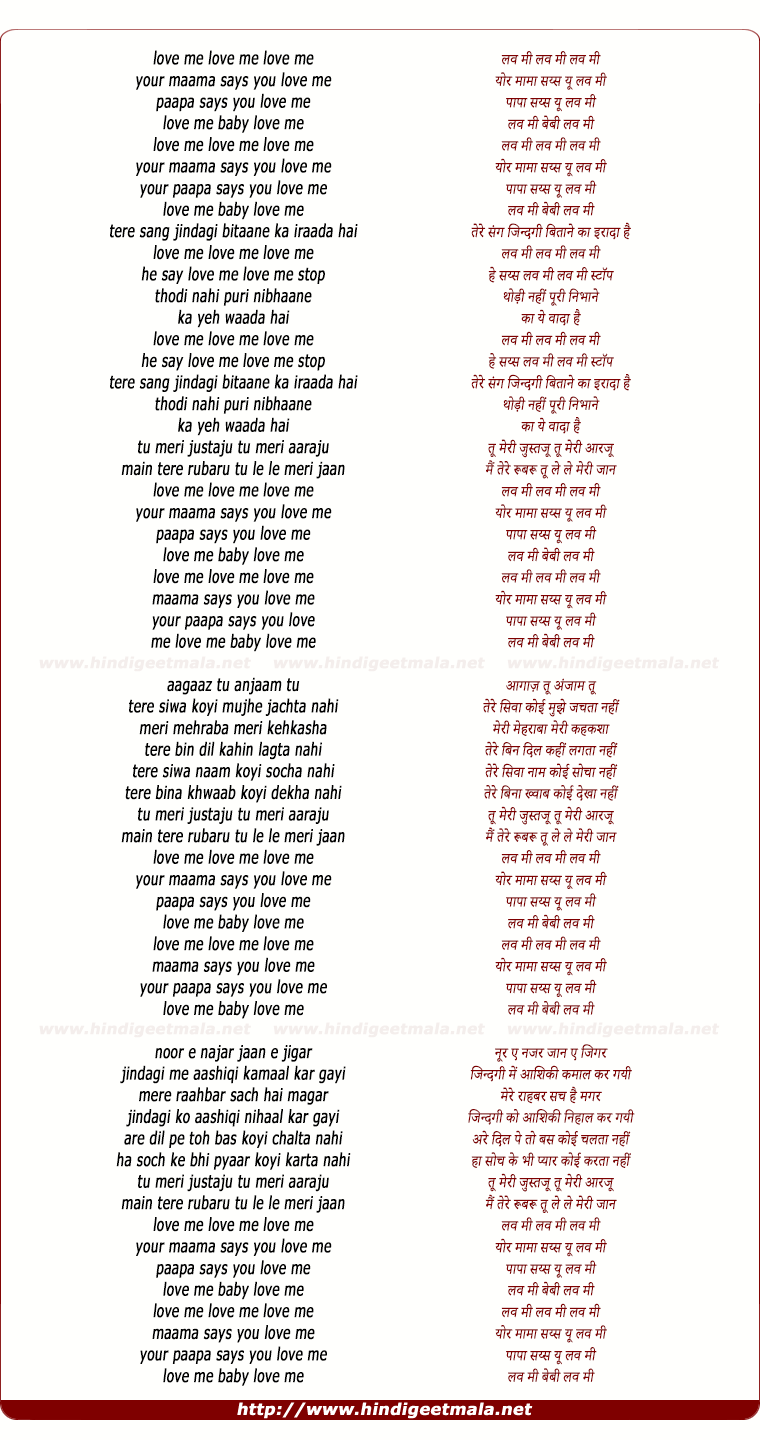 Comments on song "Love Me Love Me Love Me"
iamvidyaprakash on Saturday, August 15, 2009
Prabhu Deva is a big looser.
He thinks he can make a remake of the movie pokiri but the true is that he should be restricted to dancing and not the movie making. He has made a big disaster of the moive "Pokiri (original telugu version )" which was a huge hit in telugu and till now the tollywood has never seen such a huge hit movie and now it's remade in hindi and seriously it looks like it's a parody of the original version.Guys plz watch the original telugu version called "Pokiri" it's awesom .

spraoc on Sunday, October 04, 2009
There is no comparision here.. Salman is a wrong selection for this role. Salman is definitely a misfit in all respects. He is not tall enough to do justice to the role. Salman looks more like a comedian than a hero. he is looks shorter than the girl and other dancers in the song.. lol... Aamir gone mad after Ghajini - a copy from south. He is dreaming of no 1 position. SRK is also not so good with his wrikled smiley face. He's old now. Dunno why they strugle for something they are not fit for..
djbxtreme on Tuesday, October 06, 2009
guys learn to respect a good work irrespective of the language n whether being south or north.. Pokkiri/Wanted is one movie where the hero was liked by the masses in all the 3 languages... each 3 heroes be it Mahesh Babu, Vijay or Salman, rocked the show..
n pls dont say south doesnt have any good movies.. tamil movies bring in so much creativity.. esp in music n movie making.. see the difference in raw action in Wanted n Ghajini n compare it with the action in Dhoom/Cash/Luck/Main Hoon Na stuff

rollmba on Monday, September 21, 2009
i was never ever a fan of salman.But today my friend took me to watch this movie.I thought such a waste of time and money..what happend nxt 2 and half hours changed my view..Brilliant acting by salman.Movie is worth watching again.Mix of humor ,action dance too good Prabudeva salman magic worked great.I cant belive tom iam going to watch salmans movie agin in theaters bcoz it is really sticks ur brains.Each sequence .never ever a villian of any movie made me laugh soo much.Prakash Raj was SUpeb
Tarakesh1231 on Wednesday, October 21, 2009
Hmm...seems u have forgotten something..SRK and Amir lost the best actor category to Prakash Raj in National Awards category.Kamal Hassan is the pride of Indian Cinema is South Indian..Sharukh is a gr8 fan of Kamal Hassan dude.RajniKanth is from south dear..And Mahesh Babu was offered a lead role in the Hollywood after his blockbuster "ATHIDHI" which he rejected due to his personal reasons.He was 1st offered role in wanted &he did not accept that,then that went to abhishek who rejected.hehehe
View all 394 comments related to song Love Me Love Me Love Me