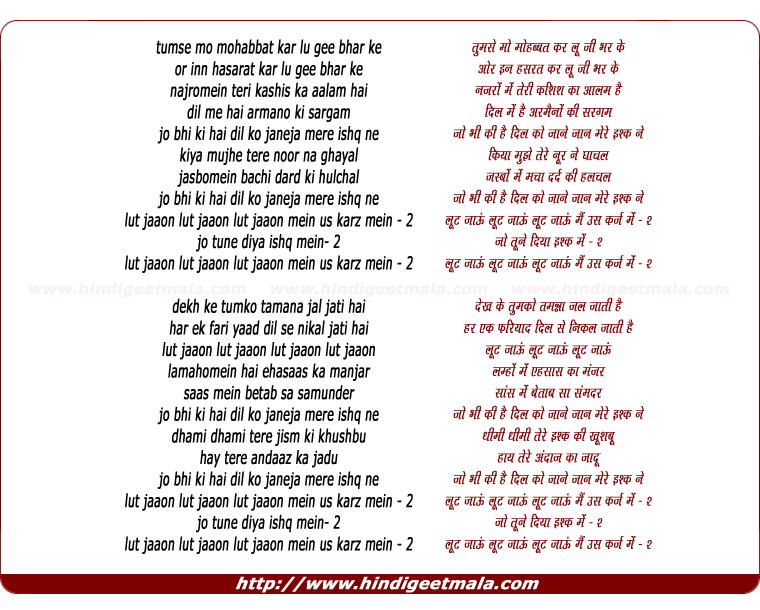 Comments on song "Lut Jaaun Lut Jaaun"
kpsloves on Saturday, October 25, 2008
u know the starting music of this song when lady sing, that music was taken from some old song, i dont know that song name but i love that music. so if u know which song was that than reply me.
zee757 on Friday, October 17, 2008
wow! KARZZZZZ! Looks soo goood
It really looks as if Himesh has worked soo hard for this movie!
cant wait to seee
song rocks!

anandramola on Wednesday, September 17, 2008
Hey...I just don't want to controversy with U.bcos I know dat u r sick...U should have to go back thr from whr u came hr...LOL..and i would like to say 1 thing to U..dat don't set ur mind to someone dat he is bad or good...If u do so den u will always find the similar result..so I think this is not ur fault actually...do comment but wen that is reasonable...and hr I think Himesh put is best effort...and we should have to encourage him which does effort...thats why i m not agree with U.
jimmpy83 on Sunday, December 14, 2008
even i used to hate this nasal vocalist.but one thing i would like to confess...atleast on commercial level this guy composing/remixing/whatever u can call it.this guys minting loads of money...and back to back hits...which is not at all a possible from someone who dont have music sense.this guys is really amazing.

but i still hate him.