Video of this song from youtube
Average Rating : 3.90
Total Vote(s) : 125
Please rate this song between 1 star and 5 stars (5 stars being the best). Just move your mouse on the stars above and click as per your rating. Your rating will really help us to improve our website. 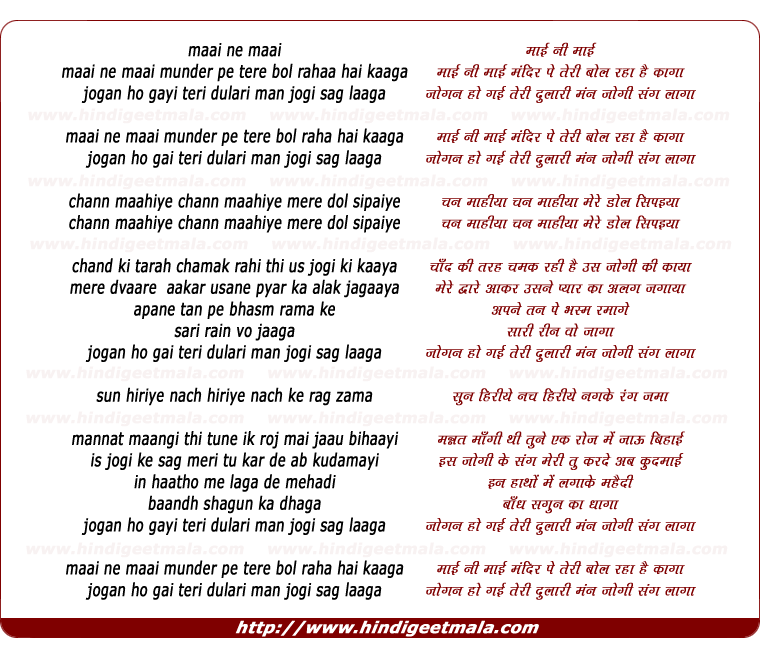 Comments on song "Maai Ne Maai Munder Pe Tere Bol Rahaa Hai Kaagaa"
hhcpostathome on Saturday, October 04, 2008
Love this movie! It's fun, charming, sad, and feel good all-in-one.
Fantastic music and dancing. It is interesting to consider this movie as a
reflection of Indian cultural values. One element that continuously pops up
in many Bollywood movies, and indeed here, is the arranged marriage. I
suspect that there is an internal present day conflict between the
exceptence of traditional arranged marriages, based on duty, and
contemporary, western influenced marriages, based on love.

bobbyBollyfan on Wednesday, August 06, 2008
I am a non-Hindi speaker, however Madhuri in all her splendour can
transcend language & cultural barriers. I am not partial to Salman in the
slightest, but did feel that Madhuri helped him 'raise the bar'. I have
seen HAHK several times & felt it would be wonderful on stage also. Its
very Indian social setting means it is not necessarily fully appreciated by
non-Indians, but Madhuri forces the more articulate among us to take note &
we are all the better for it.

Urvi123 on Friday, October 09, 2009
in the song they are saying: mom the crows are cawing, your daughter has
done something, she has lost her heart on someone, he is as beautiful as
the moon and when i first met him he asked me for my heart when i said no,
he stayed outside my door waiting for me (repeat 1st verse) listen and
dance to the lovely music you hoped i would one day fall in love now will
you give my hand in marriage to him? perform all the rituals and let me be
his.

Noregrets281 on Tuesday, June 12, 2012
Both of their most glory days of their careers, and looking their best!
this film is a million times better than DDLJ even that is also my all time
favourite. ;)))) How much I miss Madhuri's amazing dancing and acting as
well Salman's sane days and innocent acting is very undescriable.I would
give ANYTHING to get the 90s back ;))