Average Rating : 4.51
Total Vote(s) : 73
Please rate this song between 1 star and 5 stars (5 stars being the best). Just move your mouse on the stars above and click as per your rating. Your rating will really help us to improve our website. 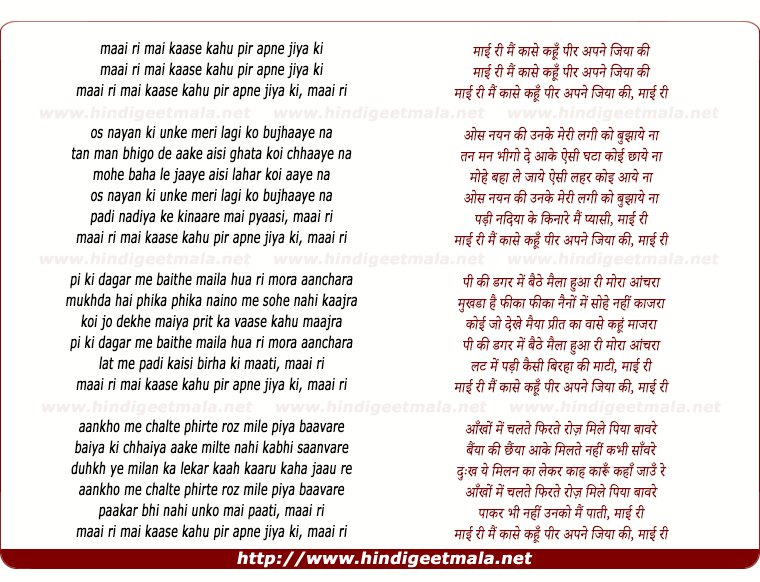 Comments on song "Maai Ri Main Kaase Kahun Pir Apane Jiyaa Ki"
Mani Menon on Wednesday, April 03, 2013
I feel so sad when I listen to this song. We'll appreciate this superb song
only if we've seen 'Dastak'. The sheer despair, helplessness and sorrow of
the young newly married wife has been brought out so well by Majroohsaab,
Madansaab and Lataji. By the way, did you know that Rehana Sultan had
married B R Ishara, the director who introduced her in movies? I read
somewhere that after he passed away, Rehana is living a life of poverty.
Poor woman! She was so much more talented..

mastkalandr on Thursday, February 23, 2012
@roswellking ..Truly said..His music was characterized by his immense
ability to meld elements of Deshi and Western classical music into a new
style of Hindi filmi song. He had a keen and sensitive ear for the nuances
of Indian classical tunes ,such as harmonies to produce a style of music
that could be appreciated by both classical music aficionados and the
common person alike Thanks for sharing my small tribute..to the Madan
Mohan: An Unforgettable Composer musical talent

mastkalandr on Saturday, April 13, 2013
She is a graduate from film and television institute ,Pune..,and daughter
of a Indian army officer . I think Chetna was her first movie as heroin
with hero Salim Durrani [ a famous cricketer ] After the death of her
husband she was seen in a few Hindi t v shows . B R Ishara was a good
writer and a producer and director . Thanks my friend! for sharing ..

Mani Menon on Thursday, April 18, 2013
Salim Durrani lived quite close to our house in Bombay. He used to walk to
the Khar Gymkhana every evening. He cut quite a dashing figure and needless
to say, there was a lot of ''ooohs'' and ''aaahs'' and ''He's so
handsome!'' from the girls on our road. He used to be married to a
beautiful Bhatanatyam dancer those days.