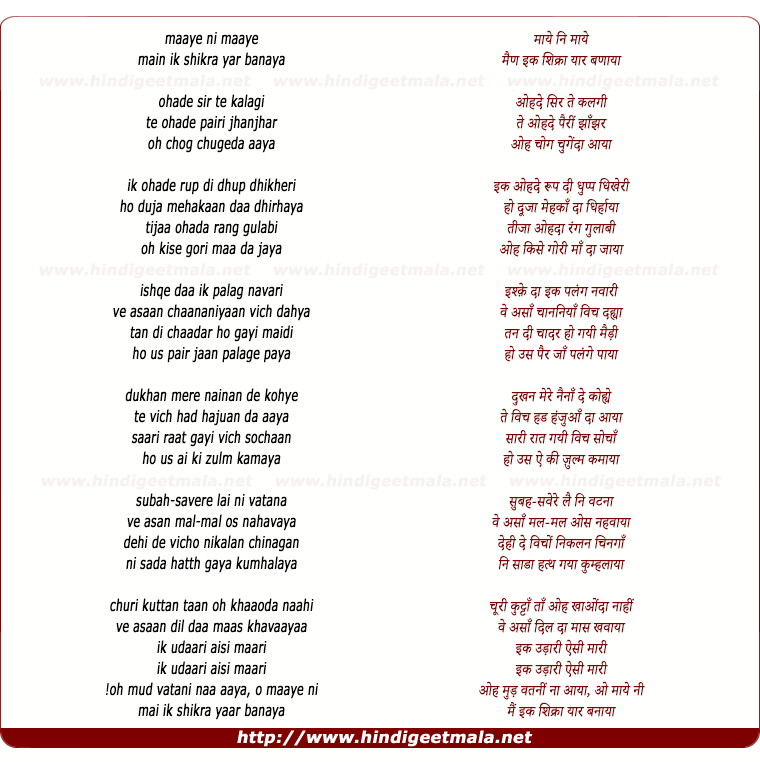 Comments on song "Maanaye Ni Maanaye Main Ik Shikraa Yaar Banaayaa"
Calm Water on Sunday, October 05, 2008
I crushed choori, He would not eat it. So I fed him the flesh of my heart.
He took flight, such a flight did he take, That he never returned. I was
enamored! Mother! Mother! I befriended a hawk. A plume on his head Bells on
his feet, He came pecking for grain. I was enamored!

Calm Water on Sunday, October 05, 2008
In his voice, Blew the eastern breeze, As sweet as the nightingale. His
smile was the whiteness of a crane in the rice fields, Taking flight at the
clap of a hand. I laid A bed of love In the moonlight. My body-sheet was
stained The instant he laid his foot on my bed.

Calm Water on Sunday, October 05, 2008
The corners of my eyes,Hurt. A flood of tears engulfed me. All night long I
tried to fathom How he did this to me. I was enamored! Early in the morning
I scrubbed and bathed my body With vatana, But embers kept bursting out,
And my hands flagged. I was enamored!

Bharat Naruka on Wednesday, October 12, 2011
@ZooniIndian With all due respect to your sentiments towards Jagajit Singh
ji, he was born and brought up in a Sikh family in Sri Ganganagar in
Rajasthan. All that apart, he was a philanthropic son of India, not just
Punjab or Rajasthan. God bless his soul.

Calm Water on Sunday, October 05, 2008
His eyes, Were an evening in springtime. His hair, a dark cloud. His lips,
A rising autumn dawn. His breath Was filled with flowers, As though it were
a garden of sandalwood. Spring danced thru his body So bathed was it in
fragrances.