Video of this song from youtube
Average Rating : 4.27
Total Vote(s) : 115
Please rate this song between 1 star and 5 stars (5 stars being the best). Just move your mouse on the stars above and click as per your rating. Your rating will really help us to improve our website. 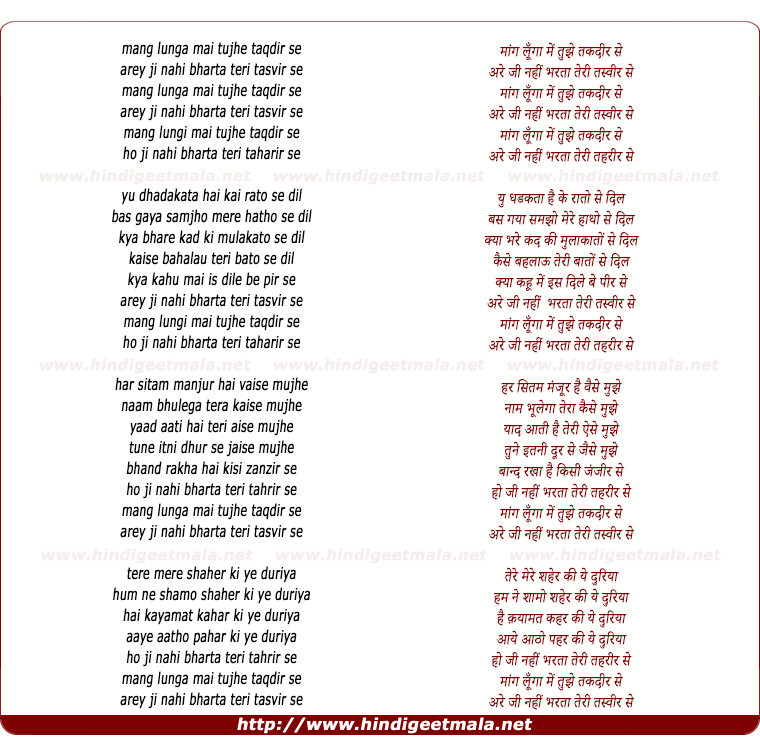 Comments on song "Maang Lunga Mai Tujhe Taqdir Se"
MrImraniccs on Saturday, August 06, 2011
Nice song with nice voices.
ThePathfinderSystem on Saturday, March 31, 2012
As I watched this song, I can tell it was picturized in the Lake Windermere in England. It is a beautiful place to visit. The lake is over 10 miles long. I hope that I will visit this area this summer. :) I will try to look for the boat ' Miss Cumbria III ' on which the song was picturised. I hope that will not be difficult to find. Oh yes, ... and I love this song ever since released.
TalDarkLeanMean on Saturday, June 02, 2012
I find it very hard to believe that they actually managed to get to Lake
District back in the 80s when the movies were rarely made outside India let
alone the northern remote corner of England. But beautiful location, very
beautiful song and hope you find the boat.

Mansoor Ilyas on Sunday, May 20, 2012
i love this song since childhood. kumar gaurav is so handsome. he has done
some good films like "naam" i wonder why he vanished so soon. he married
salman khan's sister btw. a happy couple.