Video of this song from youtube
Average Rating : 3.33
Total Vote(s) : 6
Please rate this song between 1 star and 5 stars (5 stars being the best). Just move your mouse on the stars above and click as per your rating. Your rating will really help us to improve our website. 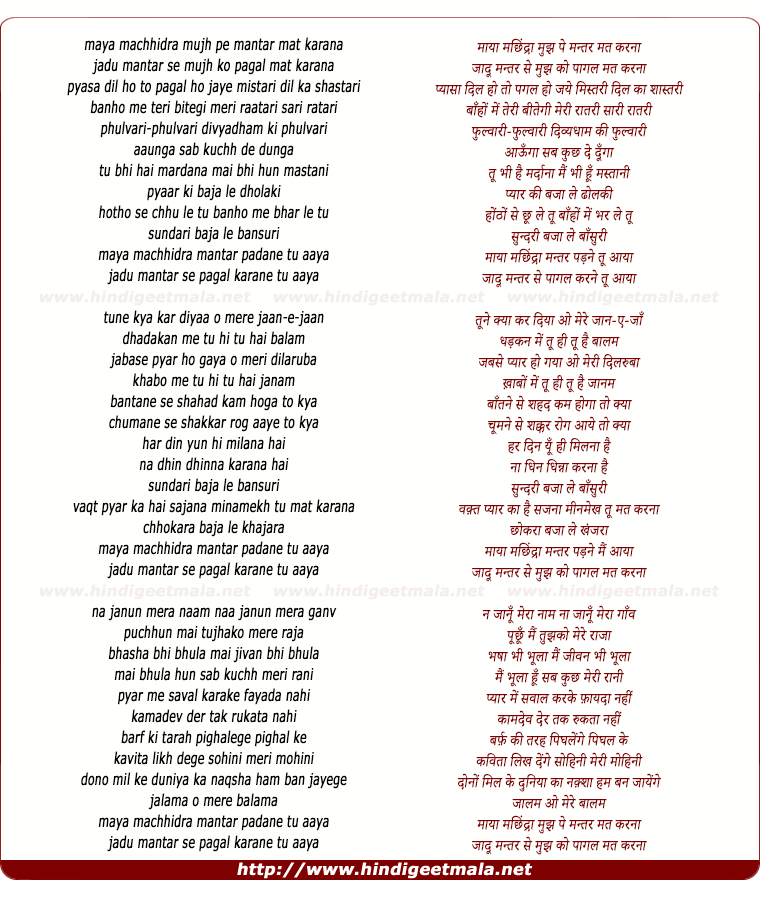 Comments on song "Maayaa Machhindraa Mujh Pe Mantar Mat Karanaa"
lankandjz on Sunday, February 28, 2010
whas ironic the movies we see today are nothing alike even though technology advanced 16++ years man i wish rajinikanth and kamal stayed young so we can see more good movies they are now at the peek of their age to act in movies.
Weet ik niet on Monday, September 17, 2012
Damn this song was way too advanced for its time. Not to mention teh
quality other music directors gave @ that time. A. R. Rahman really made a
standard on how to create music in Indian movies.

virulentv on Monday, May 04, 2009
this was the time when RAHMAN came out with his best music. inlc. Sapnay, bombay, dil se etc. after Taal things weren't the same.
TheDzenie1 on Monday, March 14, 2011
i think both KAMAL AND RAHMAN are influenced and admired by THE KING OF POP MICHEAL JACKSON
Kishore Prakash Menon on Tuesday, April 23, 2013
He didnt copy 'songs'. He perhaps got influenced several times, but seldom
copied! Yes, in Telephone song, for the rhythm, he used the same
synthesizer samples used by Ace Of Base in their song 'I saw the Sign'! But
how can u say he 'copied' their song??? Use your brain bro!! For the
novices and other beginners who have believed this comment, do listen to
the song 'I Saw The Sign' by Ace of Base and then listen to Rahman's
Telephone.