Video of this song from youtube
Average Rating : 4.64
Total Vote(s) : 14
Please rate this song between 1 star and 5 stars (5 stars being the best). Just move your mouse on the stars above and click as per your rating. Your rating will really help us to improve our website. 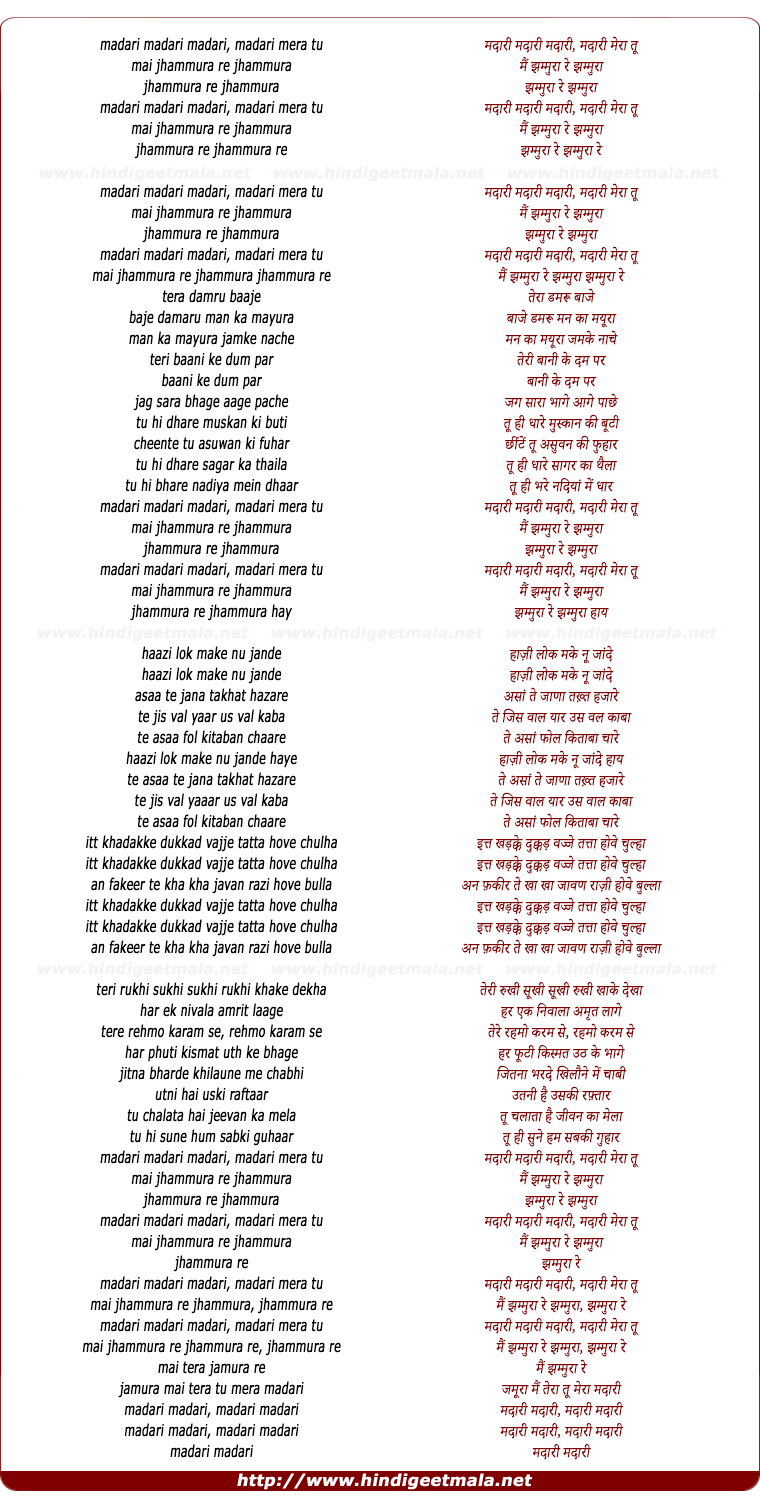 Comments on song "Madari Mera Tu"
Vaibhav Singh on Sunday, August 26, 2012
Boss! This the first time that I m anything writing on any wall only & only
due to the skill which has been compilled all together in such a way that
can related to every body with any parameters. It looks like the reflection
of every bodies destiny. It can’t be beter than anything else. No words to
describes the feeling after hearing such a fusion of
rock,sufi,religious,calassic & talent. Blow apart in tears with the
skillfull writing composion & singing at end of the song. THE RUTHLESS
TRUTH

Nirupama Singh on Monday, January 21, 2013
This is recorded live. What you are referring to is an edit glitch on the
video, the video and audio at that point aren't synced properly. Watch how
Sonu's voice and actions appear out of sync as well because the video is
delayed as compared to the audio. All coke studio songs are recorded live
there and then. Lets not discredit the massive efforts of all artists and
professionals involved, on the basis of a millisecond long editing glitch.
This is pure unadulterated music. Lets enjoy it so! :)

Jamshid Mahmood on Saturday, July 21, 2012
Itt khadakke, dukkar vajje, tatta hovey chulhaa, Aan fakeer te kha kar
jaavan, raazi hovey bulla, Old stoves and oven were made up of few brick
put together on which you can place your cooking pan and then put wood
under it and light it up. dukkar is a blow pipe which is used to blow air
on fire in order to burn it better and more wood can catch fire. so when
you`re starting to cook a meal, bricks are going to clang and `dukkar` will
start playing and stove will be heated up.

harry potter on Tuesday, August 20, 2013
rehman has become a brand so anything being made by him is considered gold.
i differ strongly. this song has way better construction. and a better
feel. i wouldn't wanna get into technicality. but i guess i can understand
the band wagon you rehman fans are on. wait till you discover there's not
just spirituality in music but a definitive approach to music. and it's
beyond antics and sound. clinton's music atleast for coke studio is far
beyond anyone's reach.