Video of this song from youtube
Average Rating : 4.58
Total Vote(s) : 483
Please rate this song between 1 star and 5 stars (5 stars being the best). Just move your mouse on the stars above and click as per your rating. Your rating will really help us to improve our website. 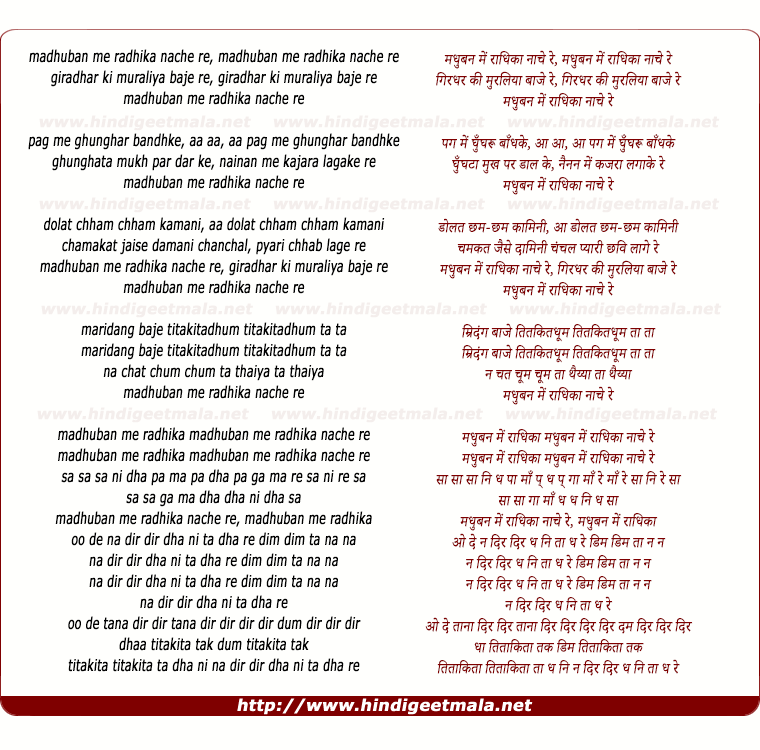 Comments on song "Madhuban Mein Radhika Nache"
Zil Hasnain Kazmi on Sunday, January 23, 2011
Centuries will pass before another voice of his calibre, elocution and
style will be gifted to this planet again. No body could ever reach to his
hights. He had complete control in all sorts of variations in singing.A
simple and naive personality.He could naturally justify the poetic lyrics
and I think the poets created these inspired by his voice as they could
imagine his immortalising their creations just as the composers did, there
is no match for this legend. May God bless him. (23-01-2011)

RatRaceAce on Wednesday, February 18, 2009
Part 2 of 3: The King tells the Prince: "All this was caused by your
carelessness, Prince. You have no right to play with your life. It is my
wish that you do not not leave the palace at night". The Prince replies:
"If Death wishes to enter, he can do so even through the four walls of a
palace." The other young man (his brother?) enters and says angrily, "I
cannot figure out which ungrateful wretch has ill-will towards our Prince.
The Prince says, "Surinder, that is not anger, but greed..."

pimt2006 on Saturday, May 08, 2010
The Beauty of this song is best composed and best picturised. It looks that the voice is Dlip Saheb it self not Mohammed Rafi. Dlip Saheb feels to comfort and music is so sweet and looks so beautiful. The sad thing is that, the next generation will not have this amazing. Mohammed Rafi was a jewel in Indian Film Industry. Since Rafi Saheb left this left world no one has taken his place. These days reality show presented many singers but is there anybody who can even touched Rafi Saheb peach.
RatRaceAce on Wednesday, February 18, 2009
Okay, regarding the conversation after the snake incident, Im posting the
rough translation in three parts: Part 1 of 3: Looks like some bad guys
released the snake to kill this Prince, but the mongoose saved his life
(you can see those guys leaving the hall after that). The women of the
court perform an auspicious ritual by waving those things around the Prince
to get rid of the "evil eye". The Queen says: "My son! God saved your life.
It's like my son has received a second life."


rkoza7 on Thursday, December 01, 2011
Rafi sahab has rendered so many classical songs. All of them are awesome and it is difficult to judge the best !! However I would consider this as ONE of the very best.. The picturization is also marvelous and Dilip Kumar sahab has enacted it so well on screen. A fantastic composition by Naushad sahab and fabulous lyrics by Shakeel sahab. This upload is having the finest audio and video quality as always. Crystal clear !! I thank you so much for this upload.