Video of this song from youtube
Average Rating : 4.48
Total Vote(s) : 50
Please rate this song between 1 star and 5 stars (5 stars being the best). Just move your mouse on the stars above and click as per your rating. Your rating will really help us to improve our website. 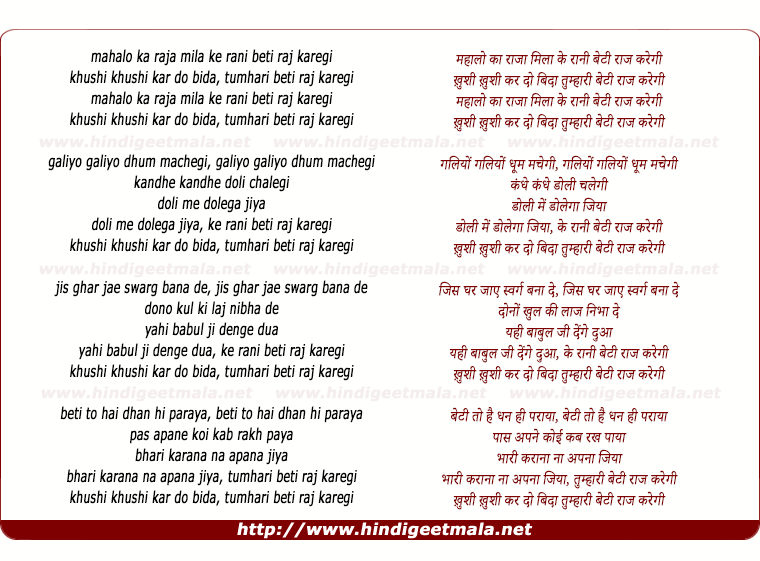 Comments on song "Mahalon Ka Raja Mila"
rumahale on Friday, October 19, 2012
The learned viewers have variety of interesting information connected to
the song; I shall not elaborate, but to enjoy this immortal song. This one
is dear to me since the day one when it was played on radio regularly. Rich
lyrics by Indeevar, tuned by Indeevar to fine composition by Roshan (alas!
it was his last movie) and soulful singing by Lata Mangeshkar impressed me
great deal. Thank you for excellent video presentation.

RealMusicKing on Monday, May 30, 2011
Hello Yuan and thank you very much. This song has a tragedy behind it. Roshan had composed it but passed way before recording. His wife completed the recording session. The entire Music Directors Brethren including Madan Madan was present to help her out with the recording. The result was phenomenal!!!
RealMusicKing on Monday, May 30, 2011
According to Wikipedia, Nargis had only one brother, Anwar. Not true. She had two brothers Akhtar Hussain and Anwar Hussain. Her last film as a heroine in 1968 was produced by A.A.N. Productions owned by Akhtar.
RealMusicKing on Monday, May 30, 2011
Film also had Balraj Sahni's son, Ajay Sahni who later changed his name to Pariskshat Sahni. Unfortunately, he was not successful with either name.
hijabq on Monday, February 16, 2009
Translation :ur daughter has got a prince, she's gona live like a princess. send her away happily bc she's gona live like a princess. streets are gonna fill with joy when she's leaving. she's going to leave happily bc she's gona live like a princess. wherever my daughter goes she makes her house a paradise to live in and makes me proud. this is what a father will wish that her daughter lives like a princess.
View all 69 comments related to song Mahalon Ka Raja Mila
Popular Links on HindiGeetMala