Video of this song from youtube
Average Rating : 4.06
Total Vote(s) : 17
Please rate this song between 1 star and 5 stars (5 stars being the best). Just move your mouse on the stars above and click as per your rating. Your rating will really help us to improve our website. 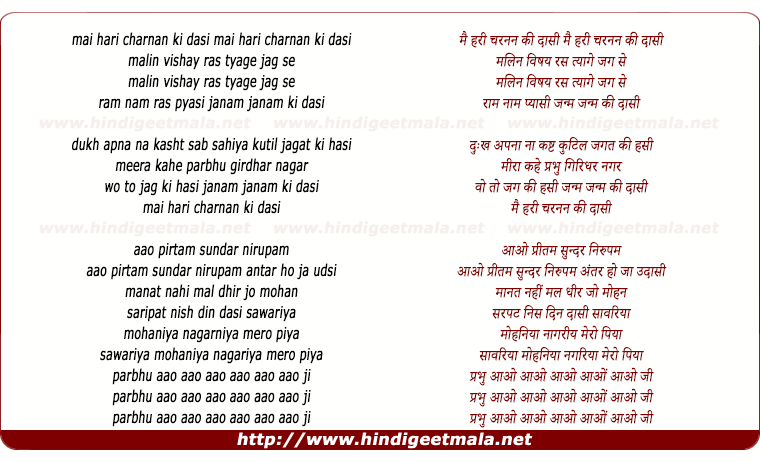 Comments on song "Mai Hari Charanan Ki Daasi"
samaganam on Saturday, September 22, 2012
Confirmed that I will listen to this song till the day I die and carry it
to which ever heavens I go later on.What a song wow!!And it haunts you so
much,it wants you to go and get that Giridhar Gopal for mai meera and stop
her from her haunting appeals to see the lord.And MS amma,if not
silliness,who are we to talk about her,but still want to say "what a
wonderful mother,did she fall on earth by mistake,out of a flock of angels
who were flying past earth while they were playing in cosmos!!"

samaganam on Friday, November 11, 2011
This song appeals more in the recorded versions than in this film,because
MS is a distraction in this video.Don't know where to concentrate,Amma's
divine face or Amma's divine song.

samaganam on Friday, December 09, 2011
Wonder what it feels like watching it in theatre,no wonder people were
mesmerized,I would have sat in the theatre till I died :-)))

TheGreatUniverse on Saturday, September 04, 2010
Thank you so much for sharing this video. Such beautiful music and
mind-blowing lyrics.takes one in another world, world of love and
joy.creates longing for the Lord. I can't thank enough.MS
Subbulakshmi has divine beauty and grace, no one else could have been able
to play the part of Meerabai better than her. I pay my obeisance to her.