Video of this song from youtube
Average Rating : 4.45
Total Vote(s) : 130
Please rate this song between 1 star and 5 stars (5 stars being the best). Just move your mouse on the stars above and click as per your rating. Your rating will really help us to improve our website. 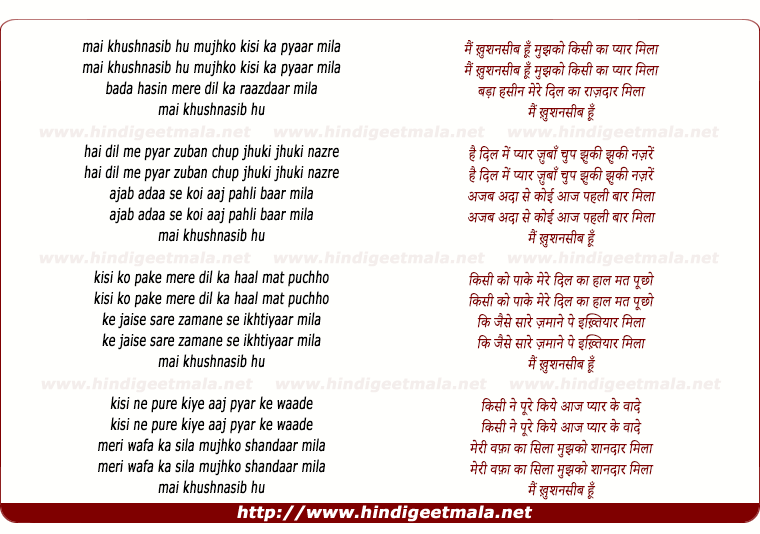 Comments on song "Mai Khushnasib Hu Mujhko Kisi Ka Pyar Mila"
RealMusicKing on Thursday, June 24, 2010
Amitajai. Hello and thank you for the wonderful uploads. I knew this song had two versions. First with Mukesh and than Mukesh with Lata. Didn't know there was a third Lata solo version which you have also posted. Amazing. Thank you. Ajit and Shakila both were from Afghanistan orginally.
tubulator01 on Friday, July 29, 2011
Thanks a lot for making such a beautiful song available to us. If you could
avoid those slight disturbances at some places it would be great. Though we
love old timer Ajit very much, he could have done some convincing key
playing instead of just wiping his hands on the keyboard.

nandu1f on Sunday, March 17, 2013
Shakila was gem, one of the sweetest face on the silver screen. A good
actress too. Did not get the accolades she deserved.

Ishtiyaq Qadri on Friday, July 17, 2015
Have seen this movie in my childhood was afraid of NA Ansari the villian of
the film throughout my childhood.still remember his one of the dialogue
in the film...YEH MAYREE NAQLI TAANG HAI AUR WOH MAYRA NAQLI SHAYER
THHA.LYRICS OF THIS LOVELY SONG ARE ALWAYS AT THE TIP OF MY
TONGUE.THANK YOU YOUTUBE AND ALL THOSE WHO HAVE UPLOADED THE SONG..﻿