Average Rating : 3.67
Total Vote(s) : 30
Please rate this song between 1 star and 5 stars (5 stars being the best). Just move your mouse on the stars above and click as per your rating. Your rating will really help us to improve our website. 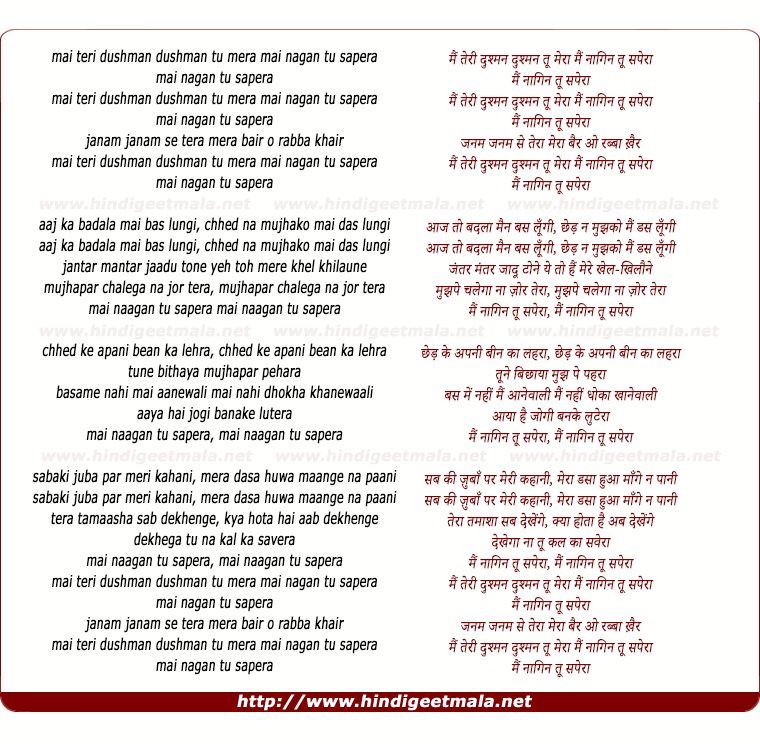 Comments on song "Mai Teree Dushman Dushman Too Mera"
Halimali on Sunday, March 22, 2009
your welcome armi this is my most fav movie. I lost the count how many
times Ive seen it. It is my sisters children most fav Bollywood movie. Now
whenever they want to watch tv they ask me to put for them the "Dushman"
song and movie. the youngest child is 4 years old and she just LOVE
Sridevi. When something comes out from heart it easily goes to hearts.
Sridevi's work specially in this movie is immortal and many generations
will watch it and admire it again and again

DilwalaisKing on Sunday, March 22, 2009
Very true, This song is such a high point in the movie. I've read that this
song was initially supposed to be a song of lament which Sridevi would sing
calling her husband being helpless. But, when the makers saw Sridevi's
fiery eyes and power packed performance, they wanted to change it and the
music directors Laxmikant Pyarelal suggested it would be more appropriate
to have a dance of vengeance challenging the charmer. And what a decision !

WilliamShakespere on Thursday, September 10, 2009
I remember back in 1988-1989, there was this girl in my class who when
given a chance by the teachers, used to sing this song and dance also
making the expressions like Sridevi.hahaha. She used to tease me a lot
and look me right in the eyes like a nagin. Now I have the dvd of this
movie also. Sridevi was just awesome in all her movies and this movie was
simply one of the best movies we ever had. I really miss the good old 80's.

Rayan Khan on Monday, December 20, 2010
@Myquestion100 Nah, Nigahen was an unnecessary sequel to this movie
featuring Sridevi and Rishi Kapoor's kids - Sridevi and Sunny Deol with
Anupam Kher as Amrish Puri's successor to evil. Give it a miss. It's quite
awful and Sridevi looks disinterested in some scenes. Doesn't mean she
didnt work hard but it was painful to watch her get so misused for a
talented actress.

DilwalaisKing on Sunday, March 22, 2009
Yes Jayaprada was a good actress definitely and she would have played the
pativrata nari to perfection. But maybe if there was jayaprada ,as I said
this song would have been a song of lament and maybe her scenes with Amrish
Puri would appear different. And yes as you said those eyes, no one can
play with them the way she does.