Video of this song from youtube
Average Rating : 4.18
Total Vote(s) : 56
Please rate this song between 1 star and 5 stars (5 stars being the best). Just move your mouse on the stars above and click as per your rating. Your rating will really help us to improve our website. 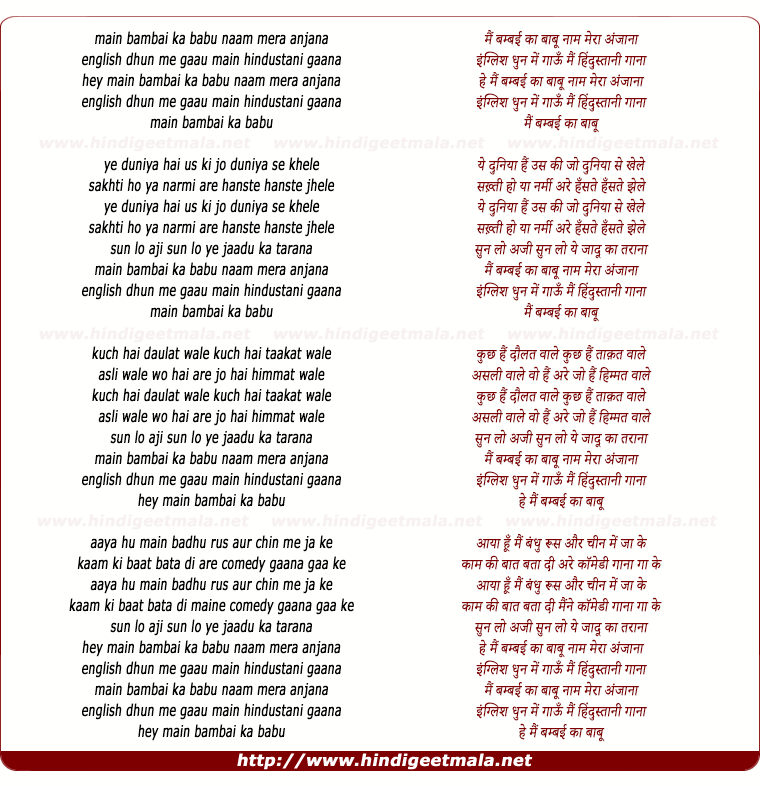 Hassan K.P. on Friday, January 11, 2013
Whenever you feel mental worries, unhappiness, etc. then just listen the
melodious songs of our great millennium singer Mohd Rafi Saheb. Not only it
give you a pleasure and energy but also help you to get rid of your all
unwanted mental disturbances. It means that rafi saheb's songs works as
tonic. Rafi Saheb has sung thousands of songs. All such songs are still
very popular among us. Rafi Saheb was God gift in our film Industry. He
will remain live in the hearts of all music lovers.

KhanSahabJi on Friday, December 07, 2012
Rafi is not just the name of a singer, it is the name of a golden era, a
phenomenon, a class apart, a pioneer in Hindi music, an elegance, an
all-encompassing standard, a variety beyond variety ... what the heart
feels listening to his voice is beyond explanation! This is a beautiful
collection!

prabhakara rao Edara on Friday, April 19, 2013
You are absolutely right sir ! All the coming generations will remember him
for melodious voice and his service to Bollywood and all the music lovers
in sub-continent.

M.Parvez Nazimuddin on Monday, April 15, 2013
You are absolutely wrong. Took down turn for a brief period only. FYI later
he came back strongly, infact he was given National and Filmfare award for
the song TERE GALION ME NA RAKHENGE KHADAM. In HATI MERE SAATHI all the
songs were sung by Kishore but one. That one was sung by Md.Rafi. Why you
know? because Kishore tried that song for atleast ten times but Music
Director was not happy. Finally kishore himself suggested Md.Rafi,s name.