Video of this song from youtube
Average Rating : 4.73
Total Vote(s) : 77
Please rate this song between 1 star and 5 stars (5 stars being the best). Just move your mouse on the stars above and click as per your rating. Your rating will really help us to improve our website. 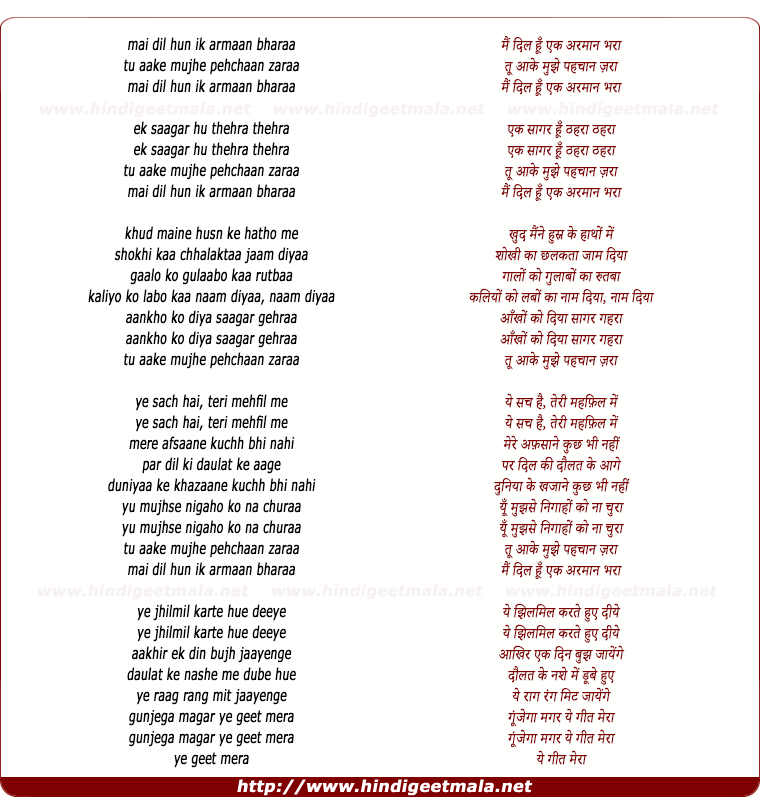 Comments on song "Main Dil Hoon Ek Armaan Bhara"
RealMusicKing on Saturday, July 02, 2011
Hello Yuan and thank you for this lovely gem written by Satyendra. He was an under-rated writer but a good one.When Roshan started he didn't have a permanent song writer for him.He started with producer/song writer Kidar Sharma in Neki Aur Badi & Bawre Nain.Throughout 1950's, he shuffled between Shailendra,Kaif Irfani,Indeevar as his lyricists.Starting Barsaat Ki Raat & Aarti, he took Sahir & Majrooh till he died. As far as I know, Satyendra only had couple of songs for him. Rgds.
P Vijay on Sunday, February 24, 2013
मैं दिल हूँ इक अरमान भरा तू आके मुझे पहचान ज़रा and then again ये सच है,
तेरी महफ़िल में, मेरे अफ़साने कुछ भी नहीं पर दिल की दौलत के आगे दुनिया के
खज़ाने कुछ भी नहीं What lovely lyrics! .. Such lyrics could only be created
by the great lyricist of yesteryears .. And what can one say about the
melodious composition of that great composer Roshan? .. This song is 60
years old today and I am sure will be heard and appreciated for another
sixty years. Simply wonderful song.

nandu1f on Friday, June 24, 2011
Top class romantic poetry. No wonder Nargis is mesmerized and drawn to
Raj's charm. One of Roshan's best. "...I am the one who compared your
cheeks to a pink rose, lips to the tender petals. And eyes to the mystery
of the deep ocean... Therefore, come and recognize my heart's desires...".
Makes you feel young again. I wonder who wrote these marvelous lyrics.
Thanks Yuan for a such a youthful pick.

Bhadresh Mehta on Friday, November 04, 2011
We know Raj Kappor from his films after Shri 420. But his films before this
era were more outstanding and superb. Dilip and Raj were real hero to show
charm even in sad songs. This is my most cherished song. Thanks for this
video. I purchsed Record changer near Rythem House, the best, you can get
record just by humming the song. My first LP was Talat in Bluemood. Many
thanks for this song.