Average Rating : 4.58
Total Vote(s) : 45
Please rate this song between 1 star and 5 stars (5 stars being the best). Just move your mouse on the stars above and click as per your rating. Your rating will really help us to improve our website. 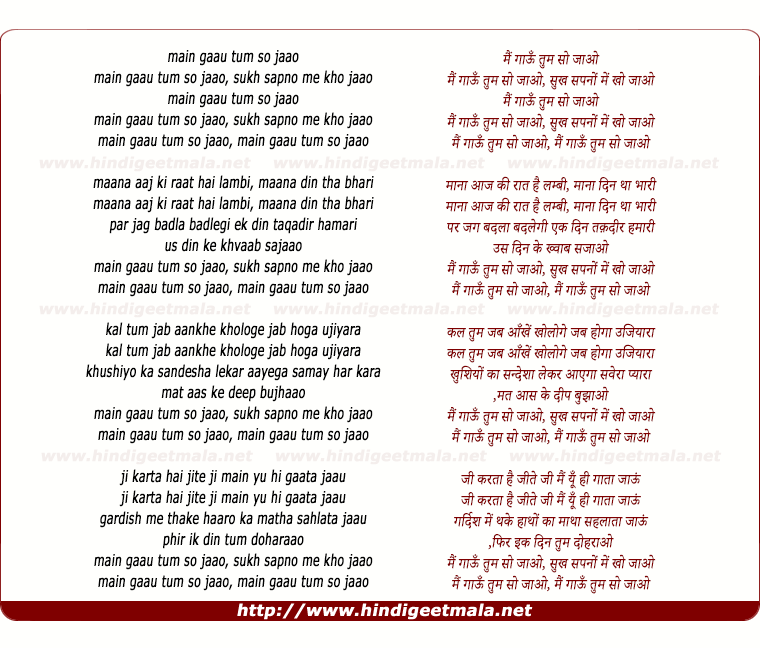 Comments on song "Main Gaun Tum So Jao"
RealMusicKing on Sunday, August 22, 2010
Question: How come in real life these actors don't establish "Orphanages"? How come there are hundreds of thousands of orphans on streets of Bombay around the studios alone?

Answer: The movie was made to make Money/Profits. Movies are watched by the poor people who are tired, exhausted & depressed. So, they spend part of the little money they have & entertain themselves. Film industry profits out of MISERY. Once in a while have fund raising parties which is just boost up their own ego.

rumahale on Wednesday, August 04, 2010
Sad songs are always beautiful - so goes a saying from eminent English poet
P B Shelly; this is re-iterated by our esteemed YT friend Prof. Vipan
Chandra ji (chamogaa); this is my experience as well. Mohammad Rafi legend
of our time excelled in all genres of singing, including sad songs. Shammi
Kapoor always remembers him for his singing brought the star to great
stature. Beautiful song and a real tribute to legend Rafi Sahab. Thanks for
making available.

RealMusicKing on Thursday, March 10, 2011
Thank you for your comment. It's all about collecting wealth via acting not about caring or fighting poverty, hunger and disease. I am sure you have tried as many others have but to no avail. Thank you.
RealMusicKing on Sunday, August 22, 2010
Hello Yuan. TY. One good song by Shankar. Also, a film with a different story. The only wrong thing in the film was..
yuanyuanyuanyin on Wednesday, August 04, 2010
Just now I got a message from my dear friend "mohan63054", saying the following.

"The lovely song you posted is a sort of lullaby, sung to put children to sleep.

The song conveys the extreme pathos felt by the hero who runs a sort of an orphanage for little children, as he is always short of resources to run an establishment on his own.
In the end he has to sacrifice his love for the heroine, Rajashree..."

Thank you my dear friend for the nice message.
Take care.