Video of this song from youtube
Average Rating : 4.59
Total Vote(s) : 162
Please rate this song between 1 star and 5 stars (5 stars being the best). Just move your mouse on the stars above and click as per your rating. Your rating will really help us to improve our website. 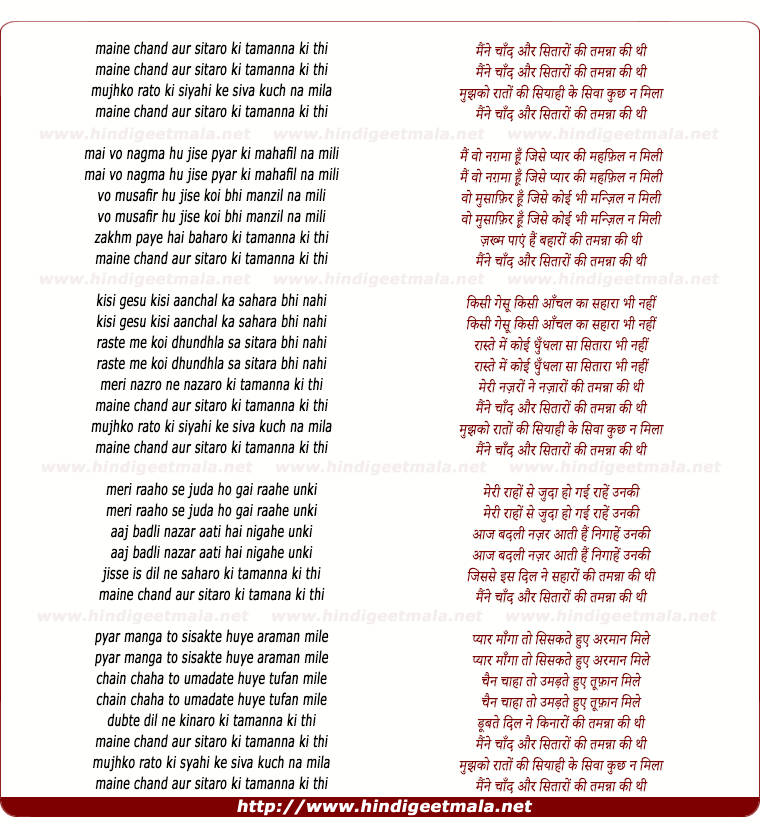 Comments on song "Maine Chand Aur Sitaro Ki Tamanna Ki Thi"
RealMusicKing on Saturday, June 12, 2010
Nice Mirza Sahib. Thank you.
Chandrakanta was a 1955 film. Sahir Ludhianvi had a quarrel with S.D. Burman. Burman had two assistants at that time, Jaidev and N. Dutta. Sahir tried to convince both of them to go independent and he would write for them. Jaidev refused as Burmans son, Rahul was not ready to assist him on a full time basis. N. Dutta went along. N. Dutta did give real good music as in this film. Sahir did write solid words for all MD's including N. Dutta.

Pashambay Baloch on Thursday, December 30, 2010
@IMIRZA777 This best orchestrization is originated by N. Dutta and today 30
December is his death anniversary. I today opened my internet to listen
only songs created by Mastereo from Goa. First assistant to Burmanda and
then indepdent composer and what classic films to his credit, Milap, Marine
Drive, Dhool ka Phool, Sadhna, Black Cat, Dharmputra, Mr X, Miss 58, Gyara
hazar Ladkiyan. Mr John, Light House and more. My humble tribute to him and
may Almighty rest his soul in peace P. Baloch

V. Siddhartha on Thursday, June 10, 2010
@rumahale Thanks for the info,Mahaleji. " I had desired the moon and
stars,but only received the bleak blackness of night." Very imaginative
words from Sahir as always.( I am doing an idiomatic translation here of
the Urdu word syahi, which is also used for black ink.)

crazyoldsongs on Thursday, June 10, 2010
v beautiful rafi song which i used to hear often on radio in any old songs'
programme and was a favourite with vividh bharti . rafi's voice is heavenly
and he always put his soul in the songs rendered by him . thanks for the
classic and thanks rumahale ji for sharing .

One of Rafi Sahib's best - one in a million. Rafi Sahib we miss you .