Average Rating : 4.52
Total Vote(s) : 81
Please rate this song between 1 star and 5 stars (5 stars being the best). Just move your mouse on the stars above and click as per your rating. Your rating will really help us to improve our website. 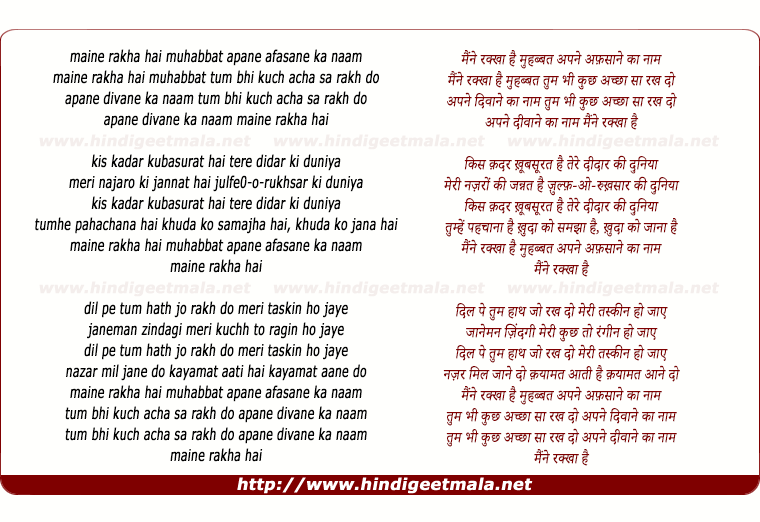 Comments on song "Maine Rakhaa Hai Muhabbat Apane Afasaane Kaa Naam"
jak simon on Sunday, December 12, 2010
oof.what a classic song! i remember hearing this when i was a little kid
back home in kenya on the radio...ooh, those days were soo good...why do
the good days have to end? why does time just fly by? i just want to come
to earth again after ai die, just to hear these songs again.time is our
enemy.

deepak deshmukh on Tuesday, October 13, 2015
For Mehmud's comedy songs RAFISAAB has used special style.For other songs
he changes the style.Similarly fort JOHNEY WALKER he has used purely comedy
style.RAFI acted through his voice. WONDERS OF NATURE IN DEED!﻿

prometheuscaptive77 on Sunday, April 04, 2010
Oh god! This song is simply cool! I heard it on radio in my school days and
just remembered it so I typed the lyrics and found it here. Thanks for
sharing it!