Average Rating : 4.41
Total Vote(s) : 1008
Please rate this song between 1 star and 5 stars (5 stars being the best). Just move your mouse on the stars above and click as per your rating. Your rating will really help us to improve our website. 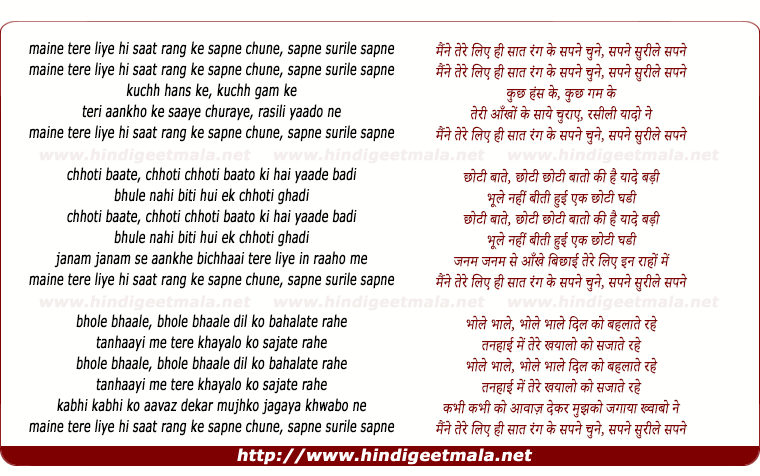 envee on Sunday, September 07, 2014
My first ever movie was Rajesh Khanna`s "Anand" I was a small boy then..
BUT TILL DATE HE IS THE ONLY HERO WHO I THINK CAN NEVER BE COMPARED TO ANY
BODY... KAKA WILL LIVE ON FOR EVER...YOU ARE GREATEST EVER TO COME TO
BOLLYWOOD.OR ANY OTHER WOODS...﻿

Altafzaman on Sunday, January 10, 2010
I saw Amitabh for the first time in this movie and have been a fan ever
since. Rajesh Khanna did tremendous justice to his author backed role but
Amitabh and his brooding image lingered in my mind long after I had left
the cinema hall.

Pratish Thakur on Saturday, May 30, 2015
In the history of Hindi Films, "Anand" will always feature in the top 5
movies of all time greats. Storyline, actors/ actress, songs, script,
music, lyrics, you name anything and you will find uniqueness here.﻿

Nikhil Crank on Saturday, July 30, 2011
we often forget the man behind the action.. ...HRISHIKESH MUKHERJEE... such
simple story telling which takes u with it makes u laugh and cry..and aftr
watching the movie u want to become a better person'