Video of this song from youtube
Average Rating : 4.10
Total Vote(s) : 10
Please rate this song between 1 star and 5 stars (5 stars being the best). Just move your mouse on the stars above and click as per your rating. Your rating will really help us to improve our website. 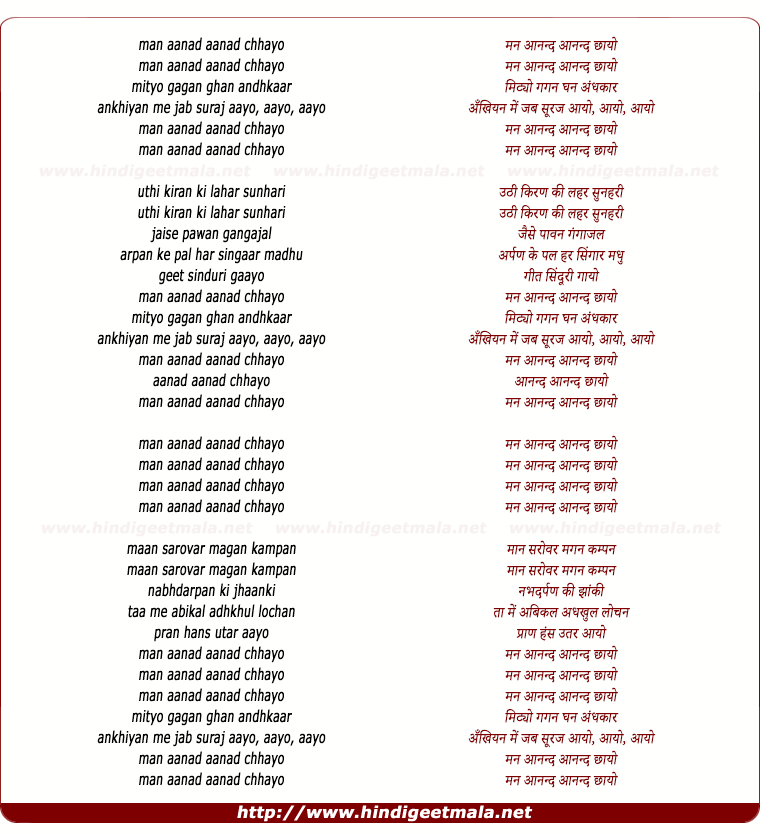 Comments on song "Man Aanand Aanand Chhaayo"
Suresh Muke on Sunday, May 17, 2015
One of the best classical song which is used in the film very effectively
to express emotions of Kunal's Mother (Rekha)...playback by Asha ji which
also based on Raag "Ahir Bhairav" is very nicely composed in the early
morning time.﻿

psuhaskhan on Saturday, June 02, 2012
Some actors take a lot of efforts in these seemingly trivial things. I
understand that Dilip Kumar took lot of pains to learn how to play Sitar
for the song "Madhuban me Radhika" The result is clearly visible .

arzaadmirza on Wednesday, August 08, 2012
The Lip Sync in Madhuban me Radhika was absolute terrible, he should have practiced more on the Lip Sync in that song, when Rafi Sahab Starts to sing the Sargam parts, dilip loses the control of the Lip Sync and just smiles.. Dilip sahab focused on how to play sitar, and rekha focused on how to lip sync, When it comes to classical songs, actors can't put it perfectly on screen, because the artist off screen preformed that perfect magic already with lots of skill! credit 2 Singers/Music-directors
qiron on Thursday, October 20, 2011
@psurajit01 I agree ... even the best of directors and actors in India miss
out on detailing for some reason ... Such careless mistakes could have been
avoided .

American Deshi on Sunday, June 17, 2012
Great song picturized on the best actress, sung by the best singer in one
of the best movie made by the best Shashi Kapoor. We salute you Shashi
kapoorji.