Video of this song from youtube
Average Rating : 4.33
Total Vote(s) : 18
Please rate this song between 1 star and 5 stars (5 stars being the best). Just move your mouse on the stars above and click as per your rating. Your rating will really help us to improve our website. 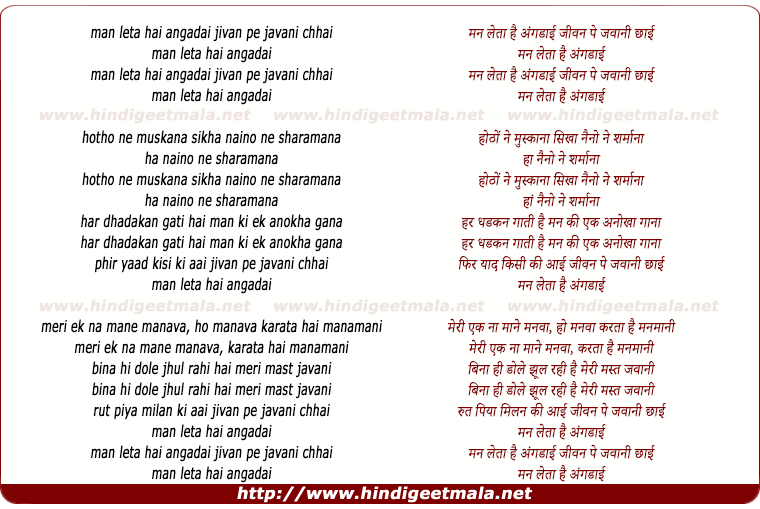 Comments on song "Man Leta Hai Angadai Jivan Pe Javani Chhai"
Bajaury on Monday, December 02, 2013
Two of the most outstanding ladies of their time, not so beautiful but with
the most beautiful voices ever. Noor jehan's voice went south in early
sixties but Suraiyya's remained intact till her golden years. None could
come close to them at their peak. Lata's voice crumbled in mid sixties but
she continued singing. Pity. She should have vacated the mantle for others
to come and shine. sad.﻿

zahir ahmed on Wednesday, March 05, 2014
Anmol Ghadi directed by the GREAT Mehboob Khan is a movie I have been
seeing since my age of 12 . I see it every two years and never get tired of
the story and the songs. ANMOL GHADI is a prestige of Bollywood.﻿

orientlover1 on Saturday, May 09, 2015
When Suraiyya died in Jan. 2004 radio stations in Bombay kept playing songs
sung by Noor Jehan from films like Anmol Ghadi, Mela and Jugnu etc. Not
knowing that the two were different persons.﻿

Matthew Bright on Wednesday, March 12, 2014
I haven't got the slightest idea what these actors are saying to one
another, but I could sit and watch this entire film without a care. Please
upload all of it.